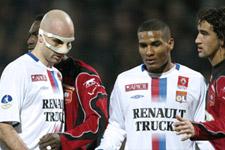 Unusually scheduled for an eight o’clock Saturday evening kick-off, squeezed between a tense Champions League tie and a controversial France-Slovakia, Lyon’s match against Rennes could be mistakenly considered a stop-gap...
After the exploits of Juninho’s right boot in Eindhoven and Raymond Domenech’s determination to call up Eric Abidal and François Clerc, suddenly this match took on all the attributes of a trap.
With their eyes still full of their European conquest, Les Gones took time to get into this match. Bogged down in a crowded midfield, the best attack in Ligue 1 never really got going.

15 minutes. That’s how long it took for Lyon to have their first shot at goal – a 25m effort from Juninho. Well held by Pouplin, Isaksson’s stand-in, it was a rare sight in the opening stages dominated by the Brittany side. The worst defence in the league (41 goals conceded) had the measure of a two-pronged Lyon attack. After a convincing appearance against Nantes last Friday, Karim Benzema was once again up front. Yet despite an attractive looking attack, it was Cris who was on show in the opening 20 minutes. With his nose protected by a mask, the Brazilian was the player who had won the most number of ball in the opening 15 minutes (10).

Rennes’ first incursion into the Lyon penalty box came after just four minutes and set the (negative) tone for the first half. John Utaka (7’) and Perrier Doumbe (13’) sent shivers through the Stade Gerland. It was the Nigerian, in top form that finally transformed Rennes domination into a goal when he placed his header beyond Grégory Coupet (20’). Very active down the wings, Laszlo Bölöni’s side never lifted off their pressure. Apparently uncertain of their new-look defence consisting of the Ghanaian John Mensah, newly arrived from Cremonese, and the neo-stopper Bourillon, Rennes decided that attack was the best form of defence. Thanks to Yohann Gourcuff (24’) and then Utaka (27’) Rennes provided more work for the France goalkeeper before deservedly doubling their advantage. After breaking away down the left, Youssouf Hadji whipped the bal lover for Gourcuff who made no mistake (32’).

Despite their terrible start, Lyon didn’t give in and reduced the deficit just before the half-time break by Juninho’s penalty (38’). Following a one-two between Sylvain Wiltord and Tiago, Nino was brought to an illegal halt in the penalty box and Juninho stepped up to register his tenth goal of the season. Another chance fell to Fred, who shot flirted with the upright (40’), before Les Lyonnais headed to the changing rooms with a one-goal deficit but real hope for the second period.

At half-time, Gérard Houllier decided to add some muscle to the midfield and replaced Tiago (ankle knock) with Djila Diarra and Diatta with François Clerc, the new star after being named by Raymond Domenech for France’s friendly against Slovakia. But the right-back didn’t get to touch the ball before Utaka had Grégory Coupet picking the ball out of his net for the third time. With a ferocious right-foot effort he restored Rennes’ two-goal lead (52’).
Urged on by a disbelieving Gerland public, Lyon laid siege to Poulin’s goal. Karim Benzema sent his effort into the stands (57’) before Juninho, leading by example, failed to hit the target (63’, 75’).

At the other end of the field, Utaka confirmed his rich vein of form after netting a hat-trick last weekend against Lens. The Nigerian beat Coupet from a Perrier Doumbe cross after more good work from the excellent Kim Kallström (73’). The Gerland crowd never stopped supporting their team and they were almost rewarded when Fred, profiting from good work by Cris, found the woodwork with his right-footed shot (82’).

At the end of a solid performance, Rennes registered their second successive win. Lyon was left with big regrets about their entry into the match and after their 3-1 defeat to Lille in December, Gérard Houllier’s side conceded their second home defeat of the season. Now Lyon must turn their heads to Ajaccio in one week’s time and show that this was nothing more than a bad night at the office.
Facebook
Tweet
Forum