The 16 Lyonnais to take on Rennes 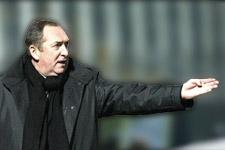 Ben Arfa, Berthod, Clément, Hartock and Pedretti will play on Saturday with the reserves in CFA, against Martigues.

“The week began well and now we have to continue on our winning ways. The lads have recovered well and they had plenty of energy at training. The most important thing after a Champions League match is the recovery and I thank the club for letting us spend the night in Eindhoven. The other important factor is professionalism, that which allows the team to quickly move on to the next challenge.”

How are you approaching this match against Rennes?
We have to be wary of Rennes who are coming off quite a performance. Utaka is playing in his correct position and he is very quick. Rennes have their problems but they played very well against Lens last weekend. It’s up to us to play in the correct manner. Turnover? The aim is to win the match. There will be some fresh legs up front to give us some speed and Cris and Diarra are fine. I said before the Nantes game that we would be finishing the season strongly and the winning machine has been set in motion…”
Facebook
Tweet
Forum