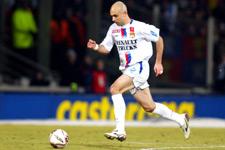 After a clash with Jefferson Farfan during the last 16 of the Champions League, Cris suffered a fractured nose.
The Brazilian defender finished the first half with a staple in his nose to keep the wound shut. However due to the intense pain, he ceded his place to Sylvain Wiltord at the break.
On Tuesday was the third time he has been substituted this season after Monaco and Nantes.

The x-ray conducted on Wednesday afternoon revealed a small fracture which will force him to wear a protective mask for Lyon upcoming games.
The injury has not ruled the player out of Saturday’s match against Rennes.
Facebook
Tweet
Forum