A look back at a beautiful European night 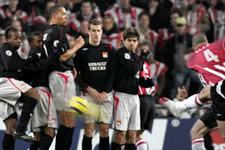 The keys to a long and successful Champions League campaign are not to make any errors, remain concentrated for 90 minutes, defend well, put away the chances that come your way, possess talented players, a quality bench and an ounce of good fortune…
We’ve heard them all over the years, even more so since the arrival of Gérard Houllier. But the proof was in the pudding on Tuesday night at the Philips Stadion, it was like the script had been written in advance.

OL emerged victorious 1-0 from a battle typified by the 50-odd free-kick blown by Mr Kyros Vassaras and the five yellow cards and one red card he dealt to the French champions. In the en dot was Lyon that won the aerial battle, despite the incredible Vennegoor. They overcame the exit of Cris and a reshuffle at the back, the red card to Govou... they had used up their quota of luck when Alex’s missile bounced off the crossbar, when Koné, alone in front of an empty goal could only find the post and when Vennegoor’s header flew just centimetres wide of Coupet’s goal. Without an exceptional save by Greg in the opening minutes to deny a VOH header, the game might not have turned out the same. His opposite number Gomes wasn’t having the same sort of night, especially against Juninho’s free-kick! Juni, once again, proved his worth in scoring his 60th OL goal, his 25th free-kick and his fourth in the current Champions League campaign. These two stars of OL have won so many matches between them.

On a slippery playing surface in the magnificent Dutch ground, Clerc continued his adaptation to the highest level of club football. The man from Bress had another great game, both defensively and offensively. Wiltord’s introduction did wonders for the French side, such is his skill and instinct on a football pitch. Portugal midfielder Tiago covered the four corners of the pitch, harassing, challenging and distributing. Diarra is a warrior. Abidal once again changed position during the match without a hiccup, and what a match he proceeded to have in the middle! Malouda moved back to left-back and was strong and controlled in his duels… OL is one well-oiled machine. Past European campaigns have brought experience, maturity and ambition, while OL’s opponents have learnt respect and even fear. Each year, the recruiting has added a little bit more, each new coach as well. Lyon won on Tuesday night, a match they certainly wouldn’t have won in the past. More proof of the club’s progress under the president, Jean-Michel Aulas.

But for now, Govou and his teammates aren’t in the quarter-finals yet. They only have to reproduce their previous round of 16 results: against Real Sociedad and Werder Bremen. Each time they won the first leg away without conceding a goal and each time Lyon found themselves in the quarters. And that’s when a new page will have to be written…
Facebook
Tweet
Forum