Some bits and pieces from Eindhoven… 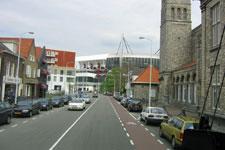 Clearly the rain has decided to stay. It’s still raining in Eindhoven, a city situated in the Meuse region of the Netherlands, around 15km from Belgium and just 50km from Germany.
Eindhoven, 200,000 inhabitants, is an industrial city where the country’s textile and tabacco industries set up at the start of the 19th century, well before those of Philips and DAF moved in during the 1920s. The Second World War destroyed a large part of the city, a strategic target given its economic importance. But that didn’t stop the Philips company from continuing to grow. A growth that got the city on its feet thanks to the infrastructures and the investment in local cultural and recreational facilities. PSV Eindhoven is perhaps the best example.

There’s not much to note in this modern city. The endless red brick houses take on a sad appearance with the inclement weather, but the wind and rain doesn’t stop the cyclists heading our in force, we are in Holland don’t forget. “This winter has been very harsh with lots of snow,” says Henke, our Taxi driver, who recommends that we take refuge in Eindhoven’s big shopping mall. As for the match? “PSV aren’t as strong as they were last season. It’s enough for the championship but the Champions League is another kettle of fish. And also, last year PSV always played the first match away… you French will be smiling tonight…” Henke takes us back to our hotel, pointing out all the sights along the way: “On your left is the Town Hall where the players come to celebrate their titles and the fans turn out to congratulate them.”

[IMG40164#R]It’s a little after 10 o’clock on the morning of February 21. We’re on the way back from Philips Stadium and the traditional pre-match meeting with the referees, directors of the two clubs and the heads of security. Bernard Lacombe is always at these meetings: “It’s been about four or five years now, I can’t remember exactly. Call it superstition if you like but I always bring the tops to the ground. Guy Genet brings them to my hotel. Tonight we’ll play in black tops and socks with grey shorts. Greg will where blue with white socks.” Bernard shows the kit to the referee, Mr Kyros Vassaras, so that he can give his all-clear with regard to those of PSV (red and white). The referees will be in yellow. There are forty-odd people in one of the function rooms at Philips Stadion: René Van de Kerkhofzaal, Ronaldo, Romario… The cult of memory is alive and well in Eindhoven where the photos of past heros to have worn the famous club colours adorn the walls. It’s funny to see all these young faces, Ronaldo, Gullit, Romario, Stam (with hair!)…

[IMG40163#L]The day will wind along at its own pace until kick-off when there will be 1,200 Lyon fans in the ground, surrounded by nearly 35,000 Dutch. OL will also be there, in a few hours, ready to play there third consecutive Champions League round of 16 tie. They have never lost the away match at this stage of the competition and here’s hoping that that doesn’t change now.
Facebook
Tweet
Forum