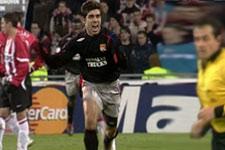 It’s a curious twist of fate that OL’s should pick up Europe’s premier club competition right where they left it 10 months ago, even if PSV could argue they are not the same team…
10 months which has seen PSV lose a large part of it’s starting XI, and OL welcome some top class reinforcements, especially in attack. After making a perfect start to this season’s comeptition, president Jean-Michel Aulas’ side seems more determined than ever leap this latest Dutch hurdle. An obligatory stopover on the route to the Stade de France, the Philips Stadion is, all the same, a source of sad memories for Juni, Govou, Coupet and the others. A cruel cemetery for all last season’s hopes, PSV’s home ground remains unbreached in this season’s European campaign. In the three continental clashes to date, the hosts haven’t yet conceded a goal, winning three from three, scoring just four goals.

Was it for this reason that the Lyonnais sat back at the start of the match? Affelay’s cross found the head of Vennegoor of Hesselink who drew Grégory Coupet, deckout out in all blue, into a superb save, just two minutes in.
It was a strange opening few minutes. Despite a very offensive opening, the Dutch struggled to cause Coupet any further trouble and OL multiplied their own errors in front of goal. Sid, after a poor back-pass from Lamey, was within a whisker of beating Gomes (7’). Djila Diarra headed straight at the Brazilian ‘keeper (11’). Malouda charged into the penalty area but missed his cross (12’). John Carew got too much angle on his header from a good Malouda cross (22’).
On the back of his superb winter, François Clerc produced a number of timely tackles, always backed up by Cris, whose nose suffered a high altitude collision with Venneggor (17’). If the defence of Gérard Houllier’s side permitted OL to remain largely unconcerned by PSV’s attack, each dead-ball situation sent shivers through the 1,200 Lyon fans in the Philips Stadion. After a yellow card for Juninho for contestation, Alex saw his effort thunder off Coupet’s crossbar. Moments later Coupet could breathe again after Culina’s searching free-kick somehow failed to find a taker (26’). The Australian set-piece specialist then went within inches of picking out Vennegoor’s head, but his cross was just too high (41’).
Despite these few scares, Lyon had the better of the closing stages of the first half. Juninho tried his aim from a direct free-kick wide on the left (31’). John Carew went close to opening the scoring on three occasions (31’, 41’ and 46’) and Florent Malouda sent over a corner which ran along the face of the Dutch goal, but avoided all contact (42’).

Without Cris, who went off at the break, but with Sylvain Wiltord author of ten goals and eight assists this season, Lyon began the second period the way PSV had begun the first. John Carew let fly with another left-foot drive, turned away by Ooijer (46’). The understanding between Govou and Nino was working perfectly which resulted in Nino’s effort just kissing the outside of Gomes right-hand upright (49’). Despite being very combative in the first half, the Dutch seemed to sit back on their goal and watched as Diarra (55’) and then Clerc (56’) both went close from distance. The young right-back Clerc was enjoying a great match, getting forward at every opportunity and he earned consecutive corners (58’ and 59’). From the second, Assaiti saved his side with a goal-line clearance after a powerful header from Carew.
Like so many times before, deliverance came in the form of a long-range Juninho strike. From a 30m free-kick the Lyon captain fired a missile at his compatriot Gomes, who misjudged the flight of the ball and conceded his European goal at home this season. After a good match last weekend against Nantes, the Penambuco native scored his fourth direct free-kick of the 2005-06 Champions League.
The Dutch, completely overrun in midfield could only watch as Lyon went closer and closer to extending their lead. Fred (70’ and 72’) and Wiltord (71’) fired without success from just outside the area.

Having kept their shape throughout the match, Gérard Houllier’s players only conceded one opening in the final 20 minutes. The Ivorian Aruna Koné found the woodwork after a solid contact with Grégory Coupet (86’). At the end of 90 minutes, Les Gones finally put an end to a run of three 1-1 draws with Guus Hiddink’s side. Just as they had done in the 2003-04 season (against Real Sociedad), Lyon won away 1-0 in the first leg of their last 16 tie.
The only cloud hanging over the result is that Sidney Govou will miss the return match after being sent-off (80’). At the end of the day, Lyon received six yellow cards, compared to zero for the hosts, despite committing seven less fouls, 20-27.

Revenge? The term doesn’t seem to fit because Lyon really deserved this win. Thanks to this win, so symbolic, the Olympians have taken a giant step towards qualifying for the quarter-finals. The hosts of the Stade Gerland now need to make it official in front of their fans. Fans that are not accustomed to bad surprises and would prefer to keep it that way as they keep their own European dreams alive…
Facebook
Tweet
Forum