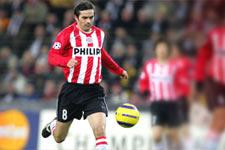 Despite his 35 years, Phillip Cocu is the uncontested leader of Guus Hiddink’s team. Tireless, he remains one of the best players in the Dutch league. He still plans on playing in the World Cup and passing the 100 international caps mark.
Before talking about his new contract extension with PSV, the former Barcelona ace spoke about his hopes for this season’s Champions League. Without former teammates Mark Van Bommel and Johann Vogel but with his new lieutenant Timmy Simons, Cocu is more than ever the leader of his team, looking to qualify for the quarter-finals of Europe’s premier club competition.

Phillip, PSV were criticised in the French media last season, Lyon weren’t happy with the way the match in Eindhoven was conducted. What are your feelings on that?

“If Lyon were angry, then I can understand that up to a certain point. I would have been upset and disappointed with such an elimination.”

Do you think Olympique Lyonnais are stronger than they were last season?

“Last year it really was 50/50. In the end it was us that got the favour of the coin. This season it will be two more interesting matches, tight and very tense. Both teams are different, this summer we saw a lot of changes to our squad. We lost a number of good players, but once again, to the surprise of many observers, here we are again on top of the table and qualified for the knockout stages of the Champions League. OL made a very good start to their domestic championship and the Champions League. It’s going to be very tight.”

The fact that you play the first game at home this time, is that a disadvantage?

“Everyone knows that it’s an advantage to play the second match at home. We profited from that last season. What it means is that we are not the favourites. It’s true that I’ve already scored at the Stade Gerland and I’ll be out to do it again.”
Facebook
Tweet
Forum