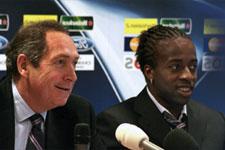 “OL seducing Europe” or even “The Knights of OL to conquer Europe.” The daily sports paper L’Equipe set the tone as the team prepared to fly out of the Saint-Exupéry Airport.
Lyon are ready to attack the last 16 of the Champions League having been drawing some worried glances and flattering comments from their rivals. Eighty minutes later and Holland emerged from the clouds after a trouble free voyage in which Rémy Vercoutre travelled next to his dad and the cakes went down a treat with the coffee. There was no bus for the team on arrival and they had to make their way through heavy rain, the 300m to the arrivals hall. Nice! The traditional autograph hunters were there, and they were superbly organised.

First stop, the stadium and then hotel as the team prepared for a marathon pre-match build-up. A press conference first thing in the afternoon, followed by training, in other words, the same old routine for these players, well-versed in the art of European matches. On Tuesday night, OL will contest its 127th European match and its 55th Champions League encounter in seven seasons.

From the airport to Philips Stadion, the countryside is hardly the stuff of romantic novels. The rain, red-brick houses, bicycle parking, and the Philips factory buildings before arriving at the stadium itself, just next to the train station. Its positioning will allow the 700 Lyon supporters arriving by train to access the ground directly by an underground tunnel while the other 500 will make their own way. Inside the stadium the working conditions are good and the corridors are adorned with photos of PSV’s famous past, including, in the press room, the lads of 1988 lifting the European Cup after defeating Benfica. Guus Hiddink was the coach of the side back then.

[IMG40152#R]From a photo to the real thing, because in the flesh and blood is the mustachio Dutch GH preparing to answer the media’s questions running well behind schedule. Apparently the shower was more important than being polite... oh well… the press conference of the French GH would go ahead on time. Another race across a town getting wetter and wetter, two or three club sandwiches and a glass of orange juice before they’re on: Gérard Houllier and Sidney Govou.

Gérard, how can we describe this meeting between the two teams?
“My aim is that we play our natural game. I know from experience that we play better when we’re not thinking about revenge, when we play for something and not against something else.”

Will you be playing a 4-3-3 formation on Tuesday?
“I don’t want to give my adversaries any tips… and you’ve already written enough after the match against Nantes.”

Will it be a tactical match?
You have to be careful not to go into a match with preconceived ideas. It will be everything: physical and tactical. You don’t need to put these ideas into the heads of your players. I know it will be a battle, the difference between these two sides will be miniscule. We’ll try and play our football and if we can play to our potential then we’ll have a good chance.”

Is OL perhaps better armed to attack this type of Cup football?
Looking at the recent past I’d have to say no. This season we set ourselves three goals. The Cup spirit is not the same. There’s no way back, there are no second chances. I’m already unhappy that we can’t train on the pitch because it’s waterlogged.”

Does the French championship seem a little weak perhaps for Lyon and are you keen to get back into the Champions League?
“Ligue 1 is a very high standard and it’s been the best rehearsal for this match. But of course we’re happy to be back in Champions League action, these games are special, where everyone is striving to be the best. We all want to be there. For this match I haven’t sort to find out what happened last year. The first match is always the most important no matter where it’s played. We’re confident, even if we know to be careful.”

How important will the flanks be?
“That’s a good question.”

What do you think of Dutch football?
“I only know what I’ve seen following certain clubs and on the TV. It’s seems as good as any other league. I was surprised to see just how tactical the play is and perhaps that explains why PSV are always so strong…”

[IMG40151#L]You were brought to Lyon to win the Champions League. Does that challenge start now?
“I’m 59-years-old, I’ve got a long record of European matches and I’d be surprised if I was judged only on the result of Tuesday’s match.”

Finally Gérard spoke in raised tones to a Dutch journalist that asked again about a feeling of revenge after seeing the video of the non-penalty on Nilmar last season: “I will say it again, no. Now if you ask me if there was a foul on Nilmar, then I would answer, yes. Yes, Lyon should have qualified and you would feel the same if it happened to you. You see, I call a spade a spade.”

Sidney, is it really a new story?
“Yes. Last season’s match is finished, in the past…”

Are you ready for the phydsical challenge?
I don’t remember if the last match was tough physically. I remember the elimination. The passed is in the past. With Fred and Jophn up front it’s different now and it’s important that they’re there. The wings? Last season it was important. But obviously it’s important all over the park. Last season they had Lee. They don’t this season so well have to see.