All the match day facts and figures 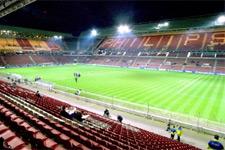 From the stadium to the referee, via the team stats sheets, take a closer look at PSV – OL…
The Stadium:

Philips Stadion has a 35,000 seat capacity. Full-houses are regular occurrence, as was the case for last year’s Champions League quarter-final return leg between PSV and Lyon.

The referee will be the Greek Kyros Vassaras. Born on 1 February 1966 in Thessalonika, he has been an international referee since 1998. He officiated at the European Championships of 2000 and 2004; and the World Cup in Japan and South Korea in 2002. He also refereed the final of the Olympic Games in Athens. Last season he took charge of the Champions League semi-final between AC Milan 2-0 PSV Eindhoven. He refereed Lyon 0-0 Ajax in 2002-03. He is a consultant away from the football field and enjoys painting and swimming.

Three Dutch clubs have previously played OL, all of them in the Champions League.
- In 2000-01, the double header against Heerenveen finsihed with two OL wins: 3-1 (home) and 2-0 (away). Marlet and Anderson got two goals apiece, Malbranque 1 and one own goal.
- In 2002-03 Ajax won both meetings: 2-1 (in Holland) and 2-0 (at the Stade Gerland). Anderson scored 1 goal.
- In 2004-05 came PSV Eindhoven for two 1-1 draws and the Dutch winning on penalties. Malouda and Wiltrod scored a goal each. Cocu and Alex got the others.

Guus Hiddink’s side is leading the Dutch championship after 25 matches with 63 points. 20 wins, three draws and two losses, 51 goals scored and 16 conceded. Farfan has scored 17 goals. The side is also still in the domestic Cup competition.

Tuesday night will be Lyon’s 127th European match and the 55th in the Champions League.
Facebook
Tweet
Forum