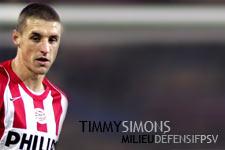 After the departure of Van Bommel, Vogel and Park, PSV persuaded Belgian international Timmy Simons to switch to Eindhoven. Timmy, a 29-year-old defensive midfielder came from FC Brugge and already knew all about the strength of OL.
Timmy, a word on this upcoming game?

“It’s not the first time that the draw has pitted PSV and Olympique Lyonnais against each other. Even though I was in Belgium at the time, suffice to say that the French and Dutch champions know each other well. This summer we played OL in the Peace Cup in South Korea. OL have very solid players that form a very good team. Up until now, Gérard Houllier’s men have only lost once in the league, they were crowned champions for the last four years in a row and they’re on the way to earning a fifth. But the Champions League is a different competition entirely. In a two-legged tie, who knows what could happen.”

Do you think Lyon will be looking for revenge?

“Of course there will be feeling of revenge. It’s difficult to tell just how important a factor it could be. PSV is also very determined to make the quarter-finals. We know what we have to do to win, but the club hasn’t forgotten how tough it was last year, we have to be ready for everything.”

"Personally, I’m very familiar with this team. A few seasons ago we beat them 4-1 at home but were then eliminated at the Stade Gerland thanks to a Sonny Anderson hat-trick, of which the last goal he scored two minutes into stoppage time. It was a UEFA Cup match. Since then Olympique Lyonnais have stopped getting better in the Champions League. I remember that Govou was already there, Juninho as well. His free-kicks are simply amazing. He shoots from more than 30m out with force and precision. Obviously we’ll have to keep them in check throughout the match, but the most important thing is to play our own game.”
Facebook
Tweet
Forum