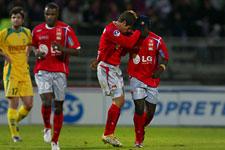 The joy within the Stade Gerland at full-time was one of relief at having got the win. After a run of three consecutive draws, which the media harped on, this victory was worth more than a more three points for a squad that so many wanted to doubt…
Of all the explanations and criticisms posed by so-called experts of the round-ball game, only what happens on the pitch counts and that’s what allowed Gérard Houllier’s men to clear away the doubts that seemed to be gathering on the horizon. Just four days before the most important match of the season, Lyon is back to winning ways are capable of great things.

However, at kick-off (delayed for several minutes due to the smoke from emergency flares) Nantes seemed anything but easy prey for this Lyon side starved of victory. Having already met twice this season, Serge Le Dizet’s side had already provided very stiff opposition to the quadruple champions of France.
A huge banner, reading Proud to be Lyonnais was hung in the Southern Stand behind Coupet’s goal, and ‘Les Lyonnais’, led by their captain Juninho hit the ground running. From the first minute, the native of Pernambuco silenced those critics of his recent performances. Juninho quickly returned to being ‘Juni’. A Juninho-esque step-over (2’) was followed by a majestic feint and then shot as the Gerland Idol set the to a Samba beat. The Brazilian maestro wasn’t long in confirming Lyon’s domination, both physically and tactically, rifling home a free-kick from just outside the area (8’). It was his first goal of the season, a sumptuous free-kick that left Mickaël Landreau’s replacement, Tony Heurtebis, no chance. Yet despite going ahead so early, Lyon refused to sit back on and risk a return of their recent attacking rustiness. Fred went close to the top corner (14’) and Karim Benzema, profiting from a rare start in place of Tiago, went close on several occasions: just a bit short (24’, 28’ and 30’), a bit to close to the ‘keeper after a double one-two with Fred (32’) and off the post (39’). The young attacker most certainly left his mark on this match.
Uncompromising in defence thanks to the athletic interventions of Cris (10’, 18’, and 21’), les Lyonnais built on a solid back-four that prevented the Canaris from finding anywhere to hide. As the minutes went by, the understanding between Florent Malouda and Eric Abidal became more and more apparent down the left flank. From a new free-kick on the left, Juninho picked out ‘Djila’ Diarra to double the mark (34’). Heurtebis didn’t have time to cool his gloves before Malouda burned the palms with a stinging drive (39’). He was quickly followed by his captain. At the heart of everything since the start, Juninho shot at the ‘keeper after another magical back-heeled one-two with Fred (44’).

Leading 2-0 at the break, the hosts began the second where they’d ended the first, on the front foot. Djila failed to hit the target (52’) but Fred wasn’t long in adding a third. Following a Müller and Fred did the rest with his left-foot to ensure a festive end to the match (56’). If the first half was marked by the impressive Juninho, it was his compatriot Fred that had set the second alight in his quest for goals – by the 65th minute he’d already shot four times at the Nantes goal.

As the match were on, the Lyon players grew in confidence, a nutmeg from Malouda, a drag back from Benzema (65’)…
It took Le Dizet’s men until the hour mark to finally find their feet. Da Rocha drew a superb save from Grégory Coupet before Mamadou Diallo reduced the deficit with a looping header (73’). Just a week after his hat-trick against Sochaux, he scored his second goal against the French champions after his strike in the Coupe de la Ligue win. He is now outright second on the goascorers’ charts with ten goals. The visitors then went close again with a shot from Jéjérmy Toulalan (79’).

Despite this brief Nantes fight back, Lyon were not troubled in the final ten minutes and went close again to restoring their three-goal lead. The substitutions of Juninho (76’) and Benzema (81’) as well as the powerful Fred shot (90’) all brought ovations from the Gerland public.

3-1. A great win. With a Juni back to his best and a Fred once again on target, there’s plenty to smile about at the Stade Gerland. Thanks to this success president Jean-Michel Aulas’ team have reclaimed a ten-point lead at the top of the standings from Bordeaux. A victory was expected from Olympique Lyonnais just days before their European rendez-vous. And perhaps their ability to deliver when they needed to was the most pleasing aspect of an evening rich in promise…
Facebook
Tweet
Forum