The return of Eric Abidal 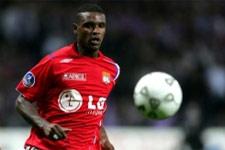 Florent Malouda must be happy: his wish of seeing Eric Abidal back at left-back will come true against Nantes on Friday.
Missing since breaking the fifth metatarsal in his left foot playing for France against Costa Rica on November 9, 2005, the Lyon defender makes his big return against Nantes this Friday at 20:45.

Already injured during the pre-season Peace Cup in South Korea, Eric Abidal made his first apperance of the season against Ajaccio on October 16. In the season to date, he has played just six games, or 496 minutes.

His last appearance in a Lyon shirt was on November 5 for the trip to Toulouse.
Facebook
Tweet
Forum