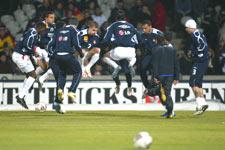 18 players left on retreat in order to propoerly prepare for the visit of Nantes. Berthod will play with the reserves against Sochaux, Clément will train on Saturday while Monsoreau, Cacapa and Réveillère are still nursing injuries.
The Squad:

Gérard, how’s it going after three draws in a row?
“Everything is fine. We’ve taken an average of two points per game since the winter break and our only real regret is dropping those two points against Auxerre. There’s no Gerland syndrome just because we drew two games at home (Auxerre and Bordeaux). But we are actually fighting against three things… First of all the backlash against the idea that OL was being favourites, secondly there’s this hype that the media tries to build up around the team which is a total illusion. In sport, everyone has the same chance and the team knows what to do. And finally, there are these rumours that get started around know by agents. All this speculation can affect an individual and take away from the team. There are three months and 24 games left, if everything goes right. The players are focused and they know what’s at stake. The players haven’t let go... we’ll finish this season very strongly, I can assure you of that.”

Talk to us a bit about how Lyon are playing…
“What hasn’t been working so well has been the link between the midfield and the attack . Paradoxically, we’ve defender very well despite having so many out injured. The key to top level football is to defend well and win the ball back early. Offensively speaking, it will correct itself. Football is something natural and you have to accept that things go in cycles. With the grounds returning a bit more to normal we’ve seen at training this week a return of the speed and interplay up front and the shooting. They’re a strong team, a disciplined team and a good bunch of lads. At any rate, he who doesn’t play the game eliminates himself.”

A word on Nantes?
“Nantes might still be feeling their 90 minutes against Troyes. We know this team has quality and that they’re playing better. We’re going to start playing every three days, which I think is almost better when you have a team of competititors, they get into the rhythm. I think the goal in stoppage time against Lens will give us a big boost. Things are going better and better and the return of Abidal is obviously another plus. Finally, the manner is equally important as the result. This game will be important for the rest of the season.”
Facebook
Tweet
Forum