Inside the Nouvel Observateur 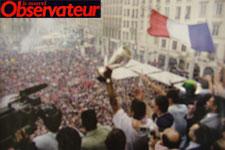 When the Nouvel Observateur spoke this week about Olympique Lyonnais.
WHEN OL TURNED LYON ON ITS HEAD:

The article isn’t long in getting to the point, as journalist Robert Marmoz wrote: “Football has made Lyon proud again, a city that was, in terms of sport, little more than a suburb of Saint-Etienne for so long. Today the city buzzes around its stadium. Even the middle class have started to let themselves go…”
And for the next two pages the report reveals that OL is turning heads all over Europe, whether it’s a blue collar fan or the heads of management.
Local enterprises are venturing into Europe by talking OL, where they hire corporate boxes for match days at the Stade Gerland.
OL: “Everyone is talking about it.” Whether it be choreographer and director of the Maison de Danse, Guy Darmet, who recounted a recent trip to Brazil: “In Brazil where I was looking for some new companies, everyone spoke to me about OL’s Brazilians.”
Even the General Prosecutor, Jean Olivier Viout, experienced it on a trip to Algeria: “When I said Lyon, the Algerian magistrates responded: OL!”
The report also pays homage to Lyon’s fans as well as the president, Jean-Michel Aulas: “Aulas built Lyon in true Lyon style, that’s to say: For us, a franc is a franc and we don’t spend what we don’t have.”
The long article ends with the presentation of OL’s upcoming Champions League clash with PSV Eindhoven, for which it quotes the Lyon president: “We need to erase the memory of our unjust defeat last year. We will win. It’s inevitable.” Robert Marmoz concludes: “‘Inevitable.’ Just as he said way back in 1987, surrounded by investors and wall charts, that one day Lyon would be champions of France.”
Facebook
Tweet
Forum