Bastia it is... at the Stade Gerland 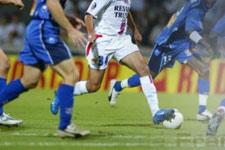 The draw for the round of 16 of the Coupe de France, by Bernard Laporte – coach of the France rugby team – decided that S.C. Bastia will be Olympique Lyonnais’ next opponents
Present at the draw on the set of Telefoot, Bernard Lacombe declared: “Anybody, but at the Stade Gerland!” He got his wish with the match to be played at Gerland on either Tuesday, March 21 or Wednesday, March 22.

Involved in the competition since Round 7, Bernard Casoni’s men accounted for Saint Joseph: 8-0. P. André scored four in front of 4,149 supporters. In Rd. 8, it was Jura-Sud-Foot’s turn, and the CFA club went down 2-0.
Bastia then beat Louhans-Cuiseaux (National) in the last 64. In a thrilling match (3-3), Nicolas Penneteau and co. finally got the upper hand in the penalty shootout (3-1). In the Rd-of-32, CFA outfit Agde held out until extra-time, before ultimately coming undone 2-0 to a Henoch Conombo brace.

In the league, the club – featuring former Lyon players Florent Laville, Yohan Gomez and Frédéric Née – have 46 points. Eight games undefeated have seen them move within striking distance of Sedan (1st – 48 points) and create a gap between themselves and Lorient (3rd – 42pts).