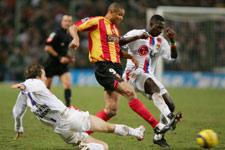 Stop or go? Lens still haven’t rediscovered their impressive form from the first half of the season. A series of games lacking something from the “Sang et Or” who are yet to shine in 2006.
Their month of January hardly made for impressive readingwith 2 draws and 3 losses and they lost 5 places in the standings. The CAN cannot be blamed this time for the poor results of Hilton and his teammates because only Issam Jemaa (Tunisia) and Aruna Dindane (Côte d’Ivoire; injured) were involved. This season the club said ‘Stop’ to the departure of their best players for a month in Africa every second year.
Go? The team that was second at the halfway mark of the campaign seemed to rediscover some of their colours against Strasbourg last weekend. Despite goinjg behind, Francis Gillot’s boys came from behind thanks to their pride, and the introduction of the young attacker Khiter. More than a struggling win, it was like a breath of fresh air before the visit of Lyon.

With the treatment room still working over-time at Tola Vologe, Clerc started on the right side of the defence and the versatile Malouda on the left, as he was against Bordeaux.

Policeman Cris was immediately in the thick of things, while Carew, who profited from a present by Coulibaly fired just centimetres wide of Otandje’s goal.
A quarter of an hour later and Alou Diarra tried his luck from 25m out but failed to draw a save from Grégory Coupet (15’). Thomert, put through, had no more luck as he pulled his shot wide (16’).
The off-side flag prevented Les Lyonnais from troubling Itandje further. While a the other end Jussiê and Thomert wasted further chances before, from a corner, Coupet saved at the feet of Hilton. After half an hour had weathered the storm and taken control of the game. Tiago let fly from just outside the area... Nino was fed by Diarra and took one touch before shooting... Juninho weaved his way through the defence before shooting... in vain (38’).
Diarra, efficient in the heart of the midfield, was up against his Malian compatriot Kaita and when Cris was called into the game, he made it look so easy!

“There won’t be much in this match,” saidPatrice Bergues at half-time.

Little fouls for example. Shortly after the break, Nino was the victim, but Juninho’s free-kick flew safely into the arms of Itandje. On the counter-attack, Lens’ Jussiê got the better of Cris and side-footed past Coupet from just inside the area (56’ : 1-0) - The Brazilian’s fifth goal of the current term for the centenary club.

Coulibaly received the first yellow card of the match for bringing down Carew. Fred replaced the Norwegian, Benzema replaced Clerc… Tiago moved to right back. Lyon went on the attack.
A one two with Wiltord and Fred put ‘Nino’ into a goalscoring position but he could only find the outside of the side netting.
The game was still going at break-neck pace…. On a typical Lens counter-attack, Tiago escaped the red card after a late challenge on Assou-Ekotto.

With just ten minutes to go Lyon obtained the first corner of the match, without success while Cris narrowly avoided a yellow card… From a Benzema cross Wiltord’s volley was punched clear by Itandje.
Lens turn: Jussiê, put through by Thomert can’t find the target with only Coupet to beat.

And just when it seemed too late, inside the two minutes of additional time, with only seconds remaining Govou deflected the ball into the area for Wiltord. After going so close earlier, this time Nino made no mistake with a superb diagonal finish in the 91st minute.

Another great finish, just as Auxerre had done to Lyon in Week 24, the draw feels like a win. And that’s in contrast to the locals who felt hit with another loss. The match did indeed turn on a few little details because another 50 seconds on the clock and Gervais Martel’s club would have pocketed two more points…
Facebook
Tweet
Forum