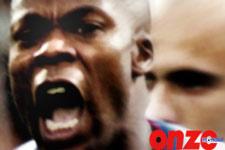 The top story in ONZE MONDIAL this February: Grégory COUPET, a Grégory COUPET playing like a lion. The title for the article: “The hunger of a Lyon.” To give you a taster of what the article comprises, look no further than this teasing phrase: “OL’s secret plan for winning the Champions Le
Olympique Lyonnais were back in the news 15 pages later. New photo: “A ferocious appetite” and it’s WILTORD that’s the subject. Then the history of the club is traced from the time that Jean-Michel AULAS took over in 1987 with a graph showing the club’s rise and rise, with the title: “THE OL ROCKET.” The club’s stability is highlighted, just ten coaches in 20 years.
OL’s other projects are presented, OLTV gets a mention, as do the plans for the new stadium. The monthly went on the note that the return of former Lyon players, such as Remi Garde, is proof that Lyon are changing with the times.
Next up was an interview with JUNINHO, a photo of JUNINHO smiling and pointing towards Brazil on the globe. In this piece, he speaks about OL, the league, the World Cup, the France team, the Champions League and this upcoming match against PSV Eindhoven. “My only aim is to qualify for the quarter-finals. I compare that team to Lille, a skilful team, but above all, an intelligent side in terms of their tactics.” And the magazine ended with a look at Eindhoven: “AN OGRE FOR LYON”, revenge is in the air, which reads: “PSV remain an incredibly tough team to beat…”
And this morning, L’EQUIPE gave the floor to Gérard HOULLIER. If certain were worried by OL’s start to the new year, the coach responded with: “We’ll be back in no time”. Hen talked about the injuries in defence and the performance against Bordeaux: I really liked the way our defence played. When you can defend well, you can attack better.” With the Champions League approaching, and the match against PSV, Gérard HOULLIER continued: I don’t want the players only thinking about revenge, that’s how we’ll slip up.”
Is Juninho’s lack of success in front of goal a concern? “He deserves a lot more credit, he works very hard for the team and the pitches are not his cup of tea of the moment.”
Facebook
Tweet
Forum