Club / Player of the Month 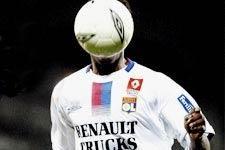 Claudio Caçapa was elected Player of the Month for January with 38,7% of the votes.
The reward for a month in which the Lyon captain played four games for four wins, 12 goals scored (including one for Claudio against Nancy) and only one goal conceded. Above the statistics, it was OL's mental strength which impressed and of which Claudio is the leader, and rightly rewarded.
His fabulous month of January, ended, unfortunately, with a tear to his left thigh muscle and he will miss between 6-8 weeks. This award will be some comfort and help him prepare for his comeback while his teammates head to Eindhoven for the last 16 of the Champions League.

With 38.7% of the votesClaudio Caçapa edged out Sylvain Wiltord,scorer of a hat-trick against Strasbourg (25.8%) and Juninho (8%).

The name of the Lyon supporter to win a dedicated shirt from Claudio will be known shortly.

Vote for the Player of the Month for February. Vote for your favourite player and you could win a dedicated top.
Facebook
Tweet
Forum