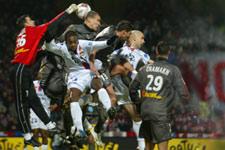 With 14 games left this season, Sunday’s clash had a special importance, and not just for the 22 players on the field.

“A lot of hopes are resting on us,” recognised Cheyrou on Bordeaux’s website.
This match seems to have stirred new interest in the title race… or rather, ‘a usefulness’ for the media. The relaunching of the Ligue 1 battle was what Bordeaux had in their minds when they arrived at the Stade Gerland. In winning form, Bordeaux has been picking off its rivals one by one - Auxerre, Monaco, Lens - and beating the whistle against Strasbourg, UlrichRamé and co. have taken 13 from a possible 15 points in 2005, just one goal conceded. Nothing seems to upset this team.

Even the mysterious departure of Kodjo Afanou can’t cast a shadow over Ricardo’s side. A shadow that Beto, in arriving from Sporting Portugal, seemed to disperse with his incredible debut against Sannois Saint-Gratien in the Coupe de France.
Henrique, Denilson and Jurietti were all back from suspension, although the latter was still absent due to a groin strain. Chamakh, was present, already back from the CAN…
So everything was going well for Bordeaux, even more when they saw that Auxerre, Lille and Paris all failed to win in round 25. But what did the people of Bordeaux want, if not a victory. Another one, a special victory over the leaders Lyon, just back from 120 minutes against Ajaccio qualifying for the last 16 of the Coupe de France. With Réveillère and Carew missing, Clerc reclaimed his place on the right of the defence. Fred was up front with Malouda and Govou on either side.

The first chances were from set pieces. Juninho fired in the first from the right, towards the front post, but Malouda, beaten by the bounce, couldn’t hit the target (9’).
Another free-kick from the specialist, this time from the left, that Ramé claimed well. Tiago also tried his luck from distance but his left-foot shot was wide (18’) and so was that with the right (19’). Both sides moved the ball around well. From a corner, Cris, wrestling with Fernando, propelled the ball against the crossbar (34’).
Following a change of pace from Monsoreau the defender ended by holding his hamstring. The Lyon defence continues to suffer from bad luck (43’). Wiltord replaced Monsoreau on the pitch with Malouda dropping back on the left.
By sides headed for the changing-rooms all-square after a very even first half.

Returning from the break, Laslandes made way for Chamakh, who found a well-organised defence that wouldn’t give him a sniff all night. All the same, Fred got a good header in, straight at Ramé. The speed of the game intesified and Cris, at the back, was in inspired form. The multiplication of fouls finally forced Mr Bré into action. After a first yellow card for Fernando, Henrique and then Darcheville each received an official warning. Juninho had two more chances to beat Ramé with free-kicks. The first found the wall… the second, the Northern Stand. The changes followed: Darcheville by Alonzo and Fred by Benzema (76’). Clément also made his way in for Tiago, suffering from a knock. The faults continued as the clock wound down. Bordeaux received a last free-kick in stoppage time, their first chance of the second half, but Denilson didn’t force Coupet into a save.

For the first time this season, Lyon returned to the changing-room, without having scored. Their opponents buckled down in front of Ramé, while Coupet, at the other end, had virtually nothing to do.
A nine-point lead before the match. A nine-point lead after it. The entire leading group failed to register a win in Round 25, so nothing changed.