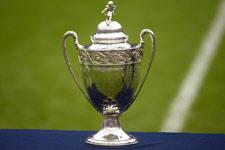 All the reactions to Ajaccio – OL in the Coupe de France.
Juninho
It was a real Cup tie. Ajaccio really gave us a run for our money and the playing conditions were also very difficult. We all knew that dead-ball situations woul prove the difference and that’s what happened. I asked Cris to go forward and he scored.
The qualification was definately warranted. But no match is easy… as we saw tonight.

François Clerc
It didn’t matter how we did it tonight, the important thing was to qualify. Ajaccio caused us a lot of problems, no game is ever played in advance.

Gérard Houllier
In the end, I have to congratulate my players for never giving up. It’s true that at one moment there I really did think the worst. My half-time talk was short: “we have to fight back”. We played an average opening 45 minutes but we finished the match well, the only thing that was missing was the goal. I have to take my hat off to this Ajaccio side who fought so hard, even with a mixed bag of regulars and reserves.
This win will serve the team well in the coming games.
Don’t forget to check out the video highlights of the match on OLWEB Premium...
Facebook
Tweet
Forum