Les Gones back from the brink 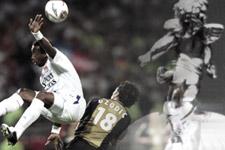 Fred up front, Carew on the right and Malouda on the left. They were the men that led the Lyon attack at kick-off in the Coupe de France round of 32 clash... And it was them that fired against the wall of Ajaccio defenders Collin, Moretti, Danjou, Robin.
Pasqualetti’s team enjoy this competition, where the slightest slip up can send you packing… for another season.
With Djila Diarra suspended, it was Tiago that occupied the holding role for OL’s 200th Coupe de France match.

In the opening exchanges the ball moved up and down the pitch without causing any real concern for Coupet at one end, or Trévisan at the other. With neither side in their stride, observation was the name of the game in an opening 15 minutes which produced little in the way of chances on goal.
Little? The travelling support certainly was, and we congratulate the 7 Lyon supporters that made the trip to the Stade François-Coty. Ajaccio could count on 4,000 and they were on their feet when Mandrichi raced clear to take on Coupet. Pat Müller showed all his positional expertise to block the shot. Juninho responded, flirting with the goal posts.

The observation period was officially over and with it the the ‘keepers Greg Coupet and Trévisan were called into action. The latter profited from the Coupe de France to pull the gloves back on after Porato had reclaimed his place for the league. Just a short temping job for Trévisan. The Corsicans were taking their time to get into the match. ‘Les Gones’ were expecting them to be more tenacious, to harrass.The coach José Pasqualetti demanded that they wake up, even rebel. They did so, just as they had against Marseille (3-1 win in Week 23) when they tasted victory for the first time in 17 games.

The first half ended with the temperature plunging again and Cris finding the woodwork with a header. It was only a break. Mr Piccirillo booked Moretti and Malouda, but the really bad news came from Anthony Réveillère, obliged to come off with his hand behind his left hamstring. Carew stayed in the changing-rooms, replaced by Govou for the second half.

As the match rolled on, the urgency returned. Neither side wanted extra-time, or even penalties. The locals were chanting “CA, CA”, but there was still no winner at the end of 90 minutes.

18th in Ligue 1 with 17 points, a long way from Troyes (25pts), Rodrigo and his teammates sat back, but they didn’t fold. They even took the lead through a deadly counterattack, Mandrichi giving the Corsicans one foot in the last 16 (94’). At the break, smiles were all over the supporters of the Island of Beauty, the staff, the bench, even the players… The entire Stade François-Coty was behind their team, but they could do nothing in the face of Cris’ headed equaliser. And the smiles suddenly switched from Ajaccio to Lyon when Govou scored the winner from Nino’s delivery.
‘Les Gones’ headed for the changing rooms topless, having left their shorts with the handful of supporters in the stadium.