Frau and Hima in Cup action 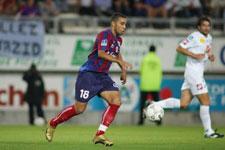 Pierre-Alain Frau and Yacine Hima both played in last night's round-of-32 Coupe de France matches.
The return of Daniel Cousin, whose absence was so cruelly felt at the Stade Chaban-Delmas, relegated Pierre-Alain Frau to the sub's bench Francis Gillot's men's trip to the Stade de la Route de Lorient.
Beaten 1-0 by an Assou-Ekotto own-goal, the Northerners are out of the Coupe de France, as the former Le Mans striker saw apenalty saved by Pouplin.Eric Cariière and co. were unable to reproduce te quality of their performance just four days earlier at the Stade Chaban-Delmas. The 67th minute entrance of PAF failed to bring the Sang et Or back on level terms.
On Saturday they host Strasbourg and will hoping to improve on a record that reads: 1 victory, 2 draws and four defeats in 7 matches.

Yacine Hima was in the starting line-up for the match between Châteauroux and Sochaux. In the 53rd minute of the game, the referee, Mr Bruno Ruffray decided to call a halt to proceedings due to the thick fog that descended on the Stade Gaston Petit.

Nilmar, top scorer in the Brazilian league with five goals will be starting up front for Corinthians as they take on Sao Bento in round 6.
Facebook
Tweet
Forum