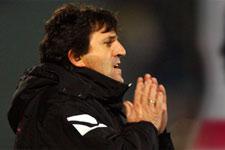 If Lyon has always performed in the Coupe de France with three wins from six finals appearances, the Athletic Club of Ajaccio has never really shined in this competition.
It’s best performances have always ben halted in the quarter-finals, in 1992 (3-0 home defeat v Monaco) and in 1996 (2-0 away defeat v Nantes). More often than not, however, the participation ends well before then. Last season, the team coached by Courbis beat Nancy away on penalties in the round-of-64, before losing on penalties to Nîmes (National).

On Janaury 7, 2005, Ajaccio qualified for the last 32 by beating Saint-Lô (CFA2) 2-0 (goals to Laurenti and Antonio Carlos). Since then, Rolland Courbis is no longer the coach. He was replaced by the former Lyon player José Pasqualetti (1982 to 1984 including 29 matches in D1) following a 2-0 home loss to Nantes. In his three matches in charge, the new coach has earned four points from nine available, compared with 13 in the previous 21 games. 8 goals were scired at home. A 2-0 defeat at Le Mans, a 3-1 home win over Marseille and a 0-0 draw against Nancy. This team that had scored a mere 10 goals has already scored three. In 17 games, Rodrigo and co. have been kept scoreless. Lucas 4, Rocchi 3, Saïfi 2, Edson, Diawara, N’Diaye and one own goal are where the goals have come from.

Having been languishing in the relegation zone for some time, the Corsicans are eight points from the safety zone, but have played one match more than Troyes in 17th. On Wednesday afternoon, Diawara and Jabi will not be there. Those two players, having played in the league matchat the Stade Gerland are currently qualified for the quarter-finals of the CAN with Guinea. This week’s match between Ajaccio and Lyon will also be the French champions 200th Coupe de France match, a match to be refereed by Mr Hervé Piccirillo. The referee was in charge of Ajaccio v Nantes (victory for the Corsicans 2-0) and OL v Le Mans (2-1) and v Monaco (2-1).
Facebook
Tweet
Forum