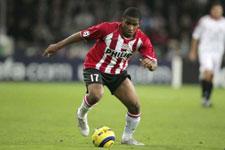 PSV Eindhoven defeated La Haye 2-0. At the end of a match they dominated from start to finish, Guus Hiddink's team claimed allthree points from Zuiderpark Stadium.
Despite missing Vennegoor of Hesselink, injured, and Aruna Koné, disputing the CAN with the Cote d'Ivoire, last year's Champions eague semi-finalists weren't stretched in overcoming ADO La Haye.
Following a scoreless first half Jefferson Farfán (55) and Phillip Cocu (78) finally made the game safe in the second. The Peruvian is more than ever the Dutch league's top scorer with 12 goals. As for the former Barcelona player, Cocu, he scored his 7th goal.
Thanks to the win, Guus Hiddink's men have reclaimed the head of the Dutch league, three points clear of AZ Alkmaar.
On Wednesday, the PSV players meet FC Groningen at the 'Euroborg Stadion in the quarter-finals of the Gatorade Cup.