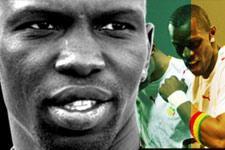 The final matches of the group phase of the 25th African Cup of Nations began this weekend and the heirarchy of African football, just four months from the World Cup changing again.
After the first two rounds of matches, certain teams heading to the World Cup have revealed some worrying weaknesses. Group B provides the perfect example with two teams not performing to the standard of the World Cup. Already eliminated, Togo, perhaps due to the volatile nature of their star Emmanuel Adebayor, fit into this category. After a 2-0 defeat to the Democratic Republic of Congo, the Togo team crashed out 2-0 to a Cameroon side buoyed by the form of African Player of the Year, Samuel Eto’o (4 goals in 2 matches). Also in the group, another surprise qualifier for the World Cup, Angola are not faring much better. Angola has only the slightest hope of qualify from the group phase, but they need to beat Togo comprehensively and hope that Cameroon beat the DRC.
In a very tight group, Marocco bowed out after the Cote d’Ivoire, already qualified, were beaten by the hosts Egypt in the final game on Saturday.
Tunisia and Guinea, play each other in the final of Group C. Both have already qualified for the next round but the winner will avoid a quarter-final showdown with the top team from Group D.
The only group still in suspense is that featuring Nigeria, ahead of Gana and Senegal. After failing to qualify for the World Cup, Lamine Diatta’s teammates put a lot of hope in this CAN, but a second game defeat to Ghana has seriously dented their ambitions. Despite a good start, the Lions of Teranga, were surprised on the quarter-hour. From a long throw on the right, Diatta misjudged the flight of the ball and Amoah profited to beat Tony Sylva at his near post. Against a well-organised opponent, the ‘Senef’ proved unable to rectify the situation. Worryingly absent for most of the match, they are now obliged to beat Nigeria on Tuesday, January 31, in teir final Group D match. Any other result would seriously compromise their chances of qualifying. But it won’t be easy with the Super Eagles riding high after a 1-0 win over Ghana and a 2-0 triumph over Zimbabwe.
Facebook
Tweet
Forum