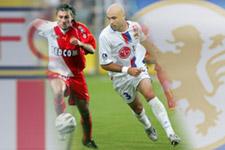 Monaco are currently 21 points behind Lyonand still haven’t won in 2006. Their record? 2 draws and 2 defeats; 1 point taken at home out of 6 possible; 3 goals scored and 5 conceded.
It’s not much… not enough for a team at the forefront of the mercato transfers. Between the deârtures (Adebayor, Evra, Maoulida) and the big name arrivals, most notably the Italian strike duo Di Vaio-Vieri, has not lived up to the expectations placed on it last August. Certainly the league title is no longer part of their plans, but a top-three finish is also slipping away. And yet, Francesco Guidolin’s team is the only one still fighting on three Cup fronts: UEFA, Coupe de la Ligue et Coupe de France! The team has the players, they just have to prove their worth on the pitch. The famous city is not necessarily the preferred destination of Olympique Lyonnais. Indeed, the visit has often been a painful one, illustrated by the two matches in the 2003-04 season, including a Coupe de France elimination, 4-1, and a heavy league defeat, 3-0. And it needed a header from Clément to avoid another defeat on February 18, 2005, as the French champions battled 10 against 11 following the expulsion of Essien. “I know all that. I think the difficulties will help galvanise the team…” Gérard Houllier admits that his side are going fr the win and to reclaim the points they dropped to Auxerre. The Olympian coach didn’t “appreciate” the loss of two points, just seconds from the end, which, in his eyes, was due to a lack of concentration and ignoring his instructions. “That will serve as a lesson…” OL hasn’t stopped learning and that is how we guage their progress. A coach delighted by the arrial of Patrick Müller. “I couldn’t be happier. Patrick was my priority. All the same, will the Swiss international start alongside Cris? Will Monsoreau be on the left or in the middle? Will Clerc continue as cover on the right? And Réveillère, returing from four weeks out, will he be back on the right or the left of yet another new-look defence? Finally, the indispensable Diarra is suspended and Lyon will be without one of its most important elements, replaced by the more than adequate Tiago. Above all that, despite the absences and the suspensions, their is no question of changing the system. So who will be the third midfielder? Pedretti or Clément ? Another declaration by the former national team coach, made during Friday’s press conference: The state of the weather which resulted in a shortened training and a huge effort from the municipal staff to disperse the thich layer of snow to make Saturday training possible. The meeting between Monaco and Lyon is, without doubt, one of the league’s big clashes. The stakes are high for the hosts: to stay in contact with the leaders, they need to beat the champions away from the Stade Gerland. It will be the first time since March 2005 (Caen). But the stakes are also high for the four-times French champions, as Gérard Houllier explained: “In Monaco and against Bordeaux we’re playing for the title... and if we win, we will be preapring in he best possible fashion or the remainder of the season.” A match in which there will be, almost exclusively, internationals on the field for kick-off. There are also some incredible battles in prospect. The Lyon defence, led by ‘The Rock’ Cris against the Italian double act Di Vaio-Vieri. How can one forget the likes of Bernardi and Zikos – two battlers who rarely give an inch (14 yellow cards this season!). In terms of the attack, OL have plenty of arguments. All that and more will have a bearing on the result as president Jean-Michel Aulas’ men try and register their first win in Monaco since Round 14 of the 2000-01 season.
Facebook
Tweet
Forum