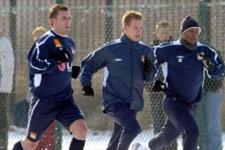 His last appearence was against Lille at the Stade Gerland on December 16. After the break Anthony Réveillère injured his left thigh, training on December 30. Four weeks later, the international defender is back and ready for action.
Obviously I’m delighted to be able to play again. Has it seemed like a long time? It’s best to be back in top form before coming back, otherwise you run a risk of re-injury. So yes, it was a long time to watch your teammates play, particularly at OL where the games are so close together. I’ve always had something in past seasons so I look on the positive side. Coming back in these conditions isn’t easy and you have to be very careful about your footing, but during a match you don’t ask any questions.

Young Clerc was excellent in covering the position and with the absences of Berthod and Abidal, does the former Rennes full-back think he will start against Monaco? “We’ll see. With the arrival of Patrick, there are five defenders for four places. I know that the coach has several options, for example, I can play on the left and the right. The coach will decide.” As for whether it would bother him to play on the left (he played only a few minutes on the left last season against Lille in the Coupe de la Ligue) “Antho” replied: I feel better on the right, for sure. But to serve the team, I don’t think about that sort of thing. Between snow in Monaco and playing on the left, I’d choose the left!”

François Clerc profited from his absence and that of Diatta (CAN) to prove himself. What has Anthony made of his performances? “I’m very happy for him. At Toulouse last season it didn’t work out so well for him. Now it’s differentand he’s played well defensively and offensively. It’s not only good for him, but also for the whole squad. After all, everybody has the quality to play, that’ what makes the competition for places. My career alsostarted by taking advantage of injuries and the CAN. François has showed he has what it takes.”

If last season, the full-back had to pull out of the Monaco match during the warm up, due to a sore ankle inflicted by the studs of Toulouse’s Dalmat, he has every chance of making the pitch this weekend. “We’re going to Monaco as leader and therefore looking for the win. The team also plays very well on the road. I twill be a great match. Di Vaio and Vieri, we know them from the television but not face to face. Di Vaio is very quick and roves around the other attacker. Vieri is a big presence in the penalty box and he shields the ball well… but there’s not only two players at Monaco. As for the standings, we’re looking after ourselves. We’re focusing on our own work...”
Facebook
Tweet
Forum