A good start for the "Senef" 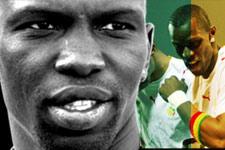 Which team will succeed Tunisia and have their country’s name engraved on the African Cup of Nations (CAN)? Winners of the last edition, Roger Lemerre’s side are eyeing the double, but competition is fierce and nobody wants to miss the final.
Cameroon, the Ivory Coast, Marocco, Senegal, Nigeria and Egypt are all chasing victory in one of the most competitive fields ever.
The first round has already seen the spotlight fall on the stars of African football and they haven’t disappointed: Eto’o, Drogba, Kalou, Martins and Chamakh are just a few of the names already on fire at CAN 2006.
At the end of the first round of matches, all groups look the same with two sides on three points and two yet to get off the mark an dit means the first game losers have no option ut to win to avoid going out at the first hurdle. Of the winners Egypte, the Ivory Coast, Tunisia, Cameroon, Nigeria and Lamine Diatta’s Senegal – the only Lyon player at the competition.
Yesterday, the ‘Lions of Teranga’Hier, beat Zimbabwe 2-0. After the disappointing performance in Tunisia two years ago (quarter-finals), the stars of the 2002 World Cup are back to prove a point after missing out on qualifying for Germany 2006. Starting in the centre of the defence, Lamine Diatta was solid against the former-Auxerre striker Benjani. The man of the match, Henri Camara also played football in France. After opening the scoring on the hour mark, the former Sedan forward pulled off a ‘Govou’ (nutmeg followed by touch-around) to lay on the second goal for Ba (81’).
The next game for the ‘Senef’ is on Friday 27 at 16 :15 against a Ghana side without Michael Essien.
Facebook
Tweet
Forum