An update on the Lyon defence 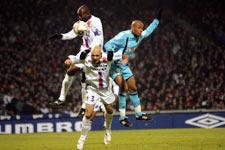 With the squad struck by injuries, it’s time to take a closer look at which combinations have played in Lyon’s 32 official matches so far this season.
Coupet has played 30 matches in their entirety; Cris 30; Cacapa 28; Réveillère 20; Berthod 15; Monsoreau 15, 11 of which at full-back; Diatta and Abidal 6; Clerc 5. This figures only take into account starting places. With substitute appearances included, Réveillère climbs to 21 matches; Berthod 17; Monsoreau 18; Diatta 9; Clerc 6.