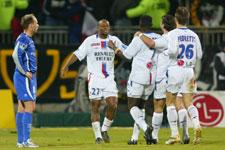 Monaco, Bordeaux, Lens, Lyon…Rennes. Auxerre’s calendar has been a challenge at the start of 2006, while Lyon’s is equally challenging, the recent results would suggest the opposite…
Indeed, OL is still marching on in 2006, with 12 goals scored in four games for as many wins. After OM and Nancy: Auxerre, Monaco, Bordeaux and Lens will try and emulate Lille’s upset win. A series of big matches which suits Lyon’s appetite down to the ground, because the Lille game, is little more than a bad memory.
Do that want it ove rand done with? The month of May seems so close and yet so far. And time is the only thing Lyon won when they lost to Nantes in the Coupe de la Ligue. Following this week without the distraction of domestic cup duty, “”freshness” is at last on Gérard Houllier’s side. The master of squad rotation can count once again on Malouda and Juninho, who both missed out against Nancy, but he will be wthout Claudio Caçapa, out for six weeks with a torn thigh muscle. Réveillère, Abidal and Diatta are still missing… for them it’s still a question of time.
Will Santini profit? The ex-Lyon boss has had plenty of time to prepare for this clash, but most questions surround his starting XI, because Benjani and Diaby both took one-way tickets for England while Kalabaane and Akalé headed for the CAN and the defenders Bolf, Sagna and Kaboul are all injured. That’s a lot for a team coming off the Cup in midweek and for Santini’s first match at Gerland since he quit the club.

It is also a first for Mr Colombo this season, referee the weekend’s final game. His watch still showed less than a minute when Carew had the ball in the back of the net, only to see the linesman’s flag raised. And despite ‘Les Gones’ laying siege to Auxerre’sgoal, Santini’s men emerged from the first 15 minutes suffering, but intact.

Pedretti’s switches of play permitted Lyon to attack from one side to the other. On the right, John Carew was showing off his pace but his first cut back was cleared… as was the second… yet from the resulting corner the giant Norwegian planted his header in the top corner of Cool’s goal and somehow the keeper lept it out! Govou was next, with another header... but Cool, as his name suggests, was not bothered. At the other end, Kahlenberg released Pieroni but the shot was too high. Cheyrou’s effort from 30m out went the same way (27’) and minutes later the same player was blocked by Cris on the edge of the area. The same went for Juninho who found Mignot just five metres out... it was getting closer. François Clerc’s cross found the head of Wiltord and then Cool’s upright as the goalkeeper passed Baratelli’s record of 274 games in Ligue 1.

Finally the pressure paid off when Mahamadou Diarra picked out Sylvain Wiltord, who teased Cool before rolling the ball back to Djila – scorer in the first meeting this season – to send OL leading into the half-time break.

The second half began with a shot from Kahlenberg, which Coupet turned behind for acorner. The Dane then made way for Luyindula, wellrecieved by the Stade Gerland. Pedretti was applauded off to make way for Tiago followed by Malouda, who replaced Carew (66’). Cheyrou still couldn’t hit the target (71’) as opposed to Juninho who found Cool’s fists (74’). Govou then crossed for Nino, but the striker’s header didn’t carry enough power (82’). Tiago then released Fred, the Brazilian rounded Cool, but the angle proved too tight and he missed (84’). Nice play from Fred and Maoulida played in Wiltord but the ball ran away...
OL was dominating the opposition, but couldn’t kill off the game. Against the run of play, Luyindula profited from good work by Pieroni to pass the ball into the empty net. Peguy still feels at home inthe stadium he knows like the back of his hand. Luyindula another goal at the same end where he scored last season for Marseille.
One last chance? One last hope? But Juninho’s free-kick didn’t draw save and Lyon heard the final whistle.

Still in third place, 15 points from Lyon, three points behind second-placed Bordeaux, the AJA are still on course for the Champions League. The draw helped Bordeaux, and of course Auxerre. ‘Les Gones’, are never happy with just a point and have already turned towards next week’s clash with Monaco.
Facebook
Tweet
Forum