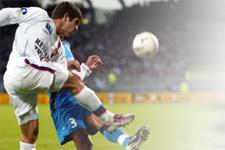 After taking a knock on his right ankle from Marseille midfielder Cana, the Brazilian Juninho should be ready to make his return this weekend against Auxerre.
When OL's matches against Auxerre come around, Juninho knows only too well that Auxerre and their goalkeeper Fabien Cool suit him down to the ground. In 10 meetings, the Brazilian has won 10 times, scoring 6 goals and delivering 5 assists. He also scored his first hat-trick in French football - including two free-kicks - against Auxerre in the 2002-03 season. Against Lens in the 2003-04 season, he scored his second and last triple.

In the last three games games against AJA, 'Juni' has scored each time; twice at the Stade l'Abbé-Deschamps and once at the Stade Gerland from a Sylvain Wiltord cross. Thi season he also placed a free-kick on the head of Diarra and last season he produced two assists from a corner and a free-kick for Essien and Cris. But don't forget, without making a mountain out of a mole hill, Juninho hasn't scored at all since his free-kick against Olympiakos on November 1. And Juninho, the passer, has not made an assist since his corner against Toulouse found the head of Govou on November 5.

Fabien Cool, who will be playing his 318th Ligue 1 match - all with Auxerre - is also the Brazilian international's favourite 'keeper to beat. He has put 6 of his 58 goals passed Cool; 6 of 45 league goals. Auxerre is also 'Juni' preferred team in terms of goals scored.
Facebook
Tweet
Forum