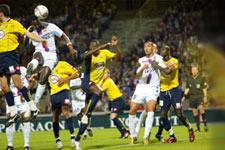 In the 83rd minute, Saturday January 14, against Nancy, Fred sealed Lyon’s win. Another win, and another headed goal. The 11th of 38, or almost 30% of the goals scored in the league this season by Gérard Houllier’s men...
It’s an impressive statistic that makes OL the leagues most proficient team in the air, ahead of Lens with nine headed goals (Jussié, Diarra and Dindane 2; Demont, Cousin and Coulibaly 1). With three winning headers in the championship (Monaco, Nantes and Nancy), Fred, the athletic Brazilian goal-machine is OL’s most deadly heading weapon just ahead of... Sylvain Wiltord. Nino? The smallest player in the Lyon squad at 1 ;74m has already scored two headers, against Metz and Strasbourg. Caçapa, Carew, Diarra, Tiago, Govou and Cris have each scored once.

But to be really thorough, one should add to those 11 league goals, 4 other headers since the start of the season: 1 in the Champions Trophée and 3 in the Champions League. With two very similar goals against Real Madrid and Olympiakos, the giant Noregian John Carew is Lyon’s top scorer in Europe.
And so the total rises to 15 goals scored by headers. Four came from corners, four more from open play and seven from dead-ball situations. Also, when Juninho doesn’t go for goal directly, there’s more often than not a Lyon head in the way.
OL is obviously well armed in the heading department, but even so, they have also suffered at the heads of others. Of the 14 goals conceded in the league this season, 5 have been headers… and more often than not, from free-kicks.
Facebook
Tweet
Forum