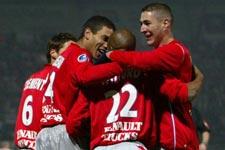 Trailing ‘Les Gones’, there’s every risk of teams falling by the wayside, as four European hopefuls go head to head just hours after Nancy – OL in Round 22. Indeed the results of Auxerre – Lens and Monaco – Bordeaux could prove profitable to Lyon...
...providing, of course, that they register a win at a rock hard and partly frozen Stade Marcel-Picot.
Nancy aren’t worried by the cold. They pushed Lyon all the way to the wire in the first game this season, before Claudio Caçapa headed all three points for the champions. And they aren’t worried by reputations, as their recent results illustrate: a win over Auxerre, a draw with Bordeaux and a win over Lens at the Bollaert, despite a Frau equaliser. Not forgetting that they also ended Marseille winning streak… The team has been earning points where they were least expected, and despite the absences of attackers Kim, Kroupi and Curbelo, they still pose a threat to the league leaders.

Gérard Houllier was forced to make four changes from the starting XI. Juninho joined Revéillère and Abidal on the treatment table while Malouda missed out again, while Diatta has joined Nancy’s Diakhate with the national team of Senegal.

Mr Ledentu was the man in the middle for this, the first game of Week 22 of Ligue 1.
From the outset Nancy pressed and won the ball high up the field. Puygrenier and Fred were going head to head. The play and the possession was perfectly divided while the Nancy formation left very little space for the Lyon front three. Even so, Sidney managed to slice through the midfield and whip a devilish centre across the face of Bracigliano’s goal. The ‘keeper managed to get things under control at the second attempt with Fred and Benzema ready to pounce (21’). Hot on the heels of his first incursion, the in-form Govou fed by Benzema then fired over (31’). Berenguer responded with a header (32’) before Sarkisian went into the book for a foul on Benzema. Govou was then brought down and Fred tried his luck with the free-kick, but without success (38’).
After a through ball from Pedretti, Benzema cut back inside the area and squared the ball to Fred whose shot was repelled by Bracigliano. The follow up saw both Benzema and Pedretti’s efforts blocked.

Mr Ledentu’s whistle sent both sides to the changing-rooms after a very even opening 45 minutes. After the break the referee got out his yellow card for Zerka. After some great work down the right the attacker too ka dive over Monsoreau’s challenge in the area, but unfortunately for him, the referee was right in the spot.
After a great steal on the left, Caçapa decided to run the ball forward. The Brazilian fed Benzema who charge into the penalty area, sent the defender and ‘keeper to the ground before cutting the ball back for his captain, the only scorer in the first round meeting, to score into an empty net. His second goal of the season, against the same team. The speed of the game accelerated with Nancy trying to get back on level terms and the Olympians keen to go on with things. Benzema saw his shot blocked (52’), Brison fired at Coupet (57’), while Cris cut out everything in the air. Chouleur came on for Nancy. Duchemin drew Coupet into a spectacular one handed save to deny a certain goal (70’).
Govou’s hunger earned him a yellow card for an overly vigorous challenge (75’). It was then the turn of Puygrenier to test Coupet. His thunderbolt was well held by Greg.
Just seconds after coming on, Wiltord dropped a corner onto the head of Fred for Lyon’s 11th headed goal of the season (83’; 0-2).
Before the end, Berthod came in for Benzema before Mr Ledentu called a halt to proceedings.

Les Gones registered their fourth consecutive win of 2006 thanks to goals to captain Claudio Caçapa, set-up by Benzema, and an unstoppable Fred header from a Nino corner. Too good in front of goal, Gérard Houllier’s men proved too string in the second half and have really put the pressure on the chasing pack that plays later tonight.