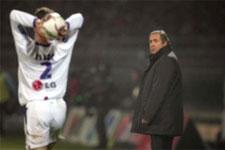 "Florent Malouda has a gastro and Juninho has a bad knock on his ankle after the tackle from Cana and are both out.” Houllier has therefore had to add two more players to the list of unavailable players which already includes Réveillère, Abidal and Diatta. He has named a 17-man squad.
The Squad:
Benzema, Ben Arfa, Berthod, Cacapa, Carew, Clément, Clerc, Coupet, Cris, Diarra, Fred, Govou, Monsoreau, Pedretti, Tiago, Vercoutre, Wiltord.

“We’re going there for the win. This Nancy outfit are a good team and I say that without trying to sound patronising. We saw it in the first match. It’s a team doing well in the league that has some great team values. I’m not surprised to see how well they’re doing. No matter who plays from this squad, the team is playing well and the players know what they have to do. It will be a good test for us.”

Regarding the five unavailable players, the coach of the quadruple French champions affirmed: “We will prove that we have a real squad and the resources to do the job. I want all 17 players to be ready. Our second half against Marseille was off the same standard as a Champions League clash. 14 points clear? Only the media is talking about that. We will not be taking it easy because of our lead, there’s no question of that happening. The game? I know one thing: it will be the fourth in 11 days and that could have a bearing.”

Finally, Gérard revealed that OL were studying the mercato: “It’s true that we have just started looking for a full-back. I look above all at the team. I was very happy with the performance of Clerc against Marseille.” The coach also announced that Anthony Revéillère is set to resume normal training as of next Tuesday: “For him, the aim is to be ready for the visit of Auxerre.”
Facebook
Tweet
Forum