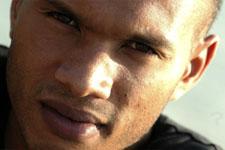 Substitute against Strasbourg, where he replaced Berthod or the last 18 minutes of the game; named in the starting line-up against Grenoble and author of his first ‘assist’ for Ben Arfa’s goal, Sylvain Monsoreau came on for an injured Berthod after just 22 minutes against Marseille.
The former Sochaux defender is one of those rare types that get along with everyone. Always available and generous with his time, open to all genre of discussions, he doesn’t shut himself up before a match but rather stays out on the pitch, chatting, taking his time and admitting for example, against Les Phocéens: "I love playing when it’s cold. I feel greqt…" Since the new year, it’s served him well!

After a little over five months of official competition in his new colours, Sylvain takes stock. “I don’t regret for one minute coming to OL. It wasn’t an easy choice at the start because I had no guarantees of a starting place. Here you have to fight. But as time went by I got to know a great squad of lads were the winning culture is an ever-present. It was never like this at Sochaux. I’m happy with my record. I also made my Champions League debut and had the pleasure of playing against Real Madrid. All that experience adds up.”

He also admits that his first few Olympian weeks were like a dream. “Despite it all I had to get used to the idea that I was actually playing for OL. It’s true! Just imagine you arrive in this team with the players it has… it’s enough to make you pinch yourself. There was an adaption period to get up and running, to prove myself. I had to get over the fear of screwing up, I had to let myself go, come out of my shell. Everything’s going better and better. Everyday I learn something new. Defensively, you have to stay focused for the full 90 minutes, which wasn’t always the case at Sochaux. The appproach for matches is also different. The team spirit is incredible. All these new things are synonymous with a top level club.”

[IMG39540#R]Happy in his new colours, the defender doesn’t hide from the fact that he must improve further certain parts of his game. “Above all, I have to re-adapt myself to playing full-back. I have to provide more attacking options like I used to for the team. At the start of the season I didn’t commit myself as I needed to, for example, to give that pass to Ben Arfa against Grenoble. It allows me to get more involved and enjoy it more.” Did you enjoy yourself against Marseille on Wednesday? “Of course. We started badly and then in the second half i twas great, pushing Marseille back in their own half and getting all three points and scoring two brilliant goals. That says it all about our spirit. We showed once again we can roll our sleeves up. There was real joy after the game, like a Cup match where everyone was pulling in the same direction.”

Marseille, is already over, two days from the trip to Nancy. “I’ve already played at the Stade Marcl-Picot with Sochaux. It was in 2000-01 in the second division and it was also in the Coupe de la Ligue, an eastern derby. It’s a pleasure to play in such a beautiful stadium. Nancy got a great result against Lens and they’ll be very motivated for Saturday…”

Sylvain chose to predict the results of three games from Round 22.

Nancy – OL: “I see a Lyon victory, 2-0, because Nancy will be up for it and they’ll press hard. We’ll be solid at the back and we should have some spaces to exploit on the counter attack. We’re also very good away from home.”

Lille – Sochaux: “It’s a very important match for my former team. Lille will want to win after defeat at Troyes. Sochaux has problems up front but are still good at the back. It could be a very tight affair. I predict a 0-0. Am I worried about Sochaux’s Ligue 1 future ? No, because the bottom three haven’t taken advantage of their draws and losses.”

Monaco – Bordeaux: “One of the rounds big games. Monaco are at home for the second time, following their draw with Strasbourg. Bordeaux are having a great season but Monaco don’t have any choice. I see an open game with a 1-0 win for Monaco.”
Facebook
Tweet
Forum