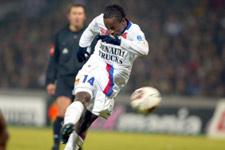 Reactions after the match OL v OM
Gérard Houllier: It was a win largely deserved because we created a number of chances in the first half. The half-time break did us the world of good. In the second half we played higher up the pitch. We made our presence felt. Today we won thanks more to our hearts and our supporters than with our skill. Once again we showed our mental strength.
Sidney’s winning goal was just fantastic.

Sidney Govou: It’s true that it was a beautiful goal, but the most important thing is the team.
It was a very tough match and we’re delighted that we came out on top.

François Clerc: Before the match my teammates gave me a lot of support and told me not to hesitate to get forward. It was even harder because I had Ribéry opposite me. When you’re playing against such a great player you have to give it 120%.
The early goal was a blow but we came back well. It was crucial that we win.

Sylvain Monsoreau: Marseille caused us some problems in the first half. After the break, we came out a changed side. Tonight we brought home a great victory.

Jérémy Berthod: I injured a nerve in my wrist and I went off because I thought i twas broken. It really, really hurt. It was frustrating because after 20 minutes it didn’t hurt any more but I couldn’t come back on to help out.
Tonight we won thanks to our “guts” and our mental strength.
When you see how happy the players were after the victory you know we won more than just three points: we also dealt a huge blow to our rivals.
All the same, we’re taking them one match at a time. We’re going to Nancy to win. We’ll see after February and a number of big games just how we stand.

Juninho: We showed a lot of heart and desire.
We deserved to win, even if OM played well. There are still a lot of games to go, so we have to stay focused.

Grégory Coupet: It was a tough game but it got the right result. OM came here to close down the game. And they did it perfectly.
We fought for the supporters who were incredible against Lille. I thank them in particular for their support.