Ajaccio it is... away 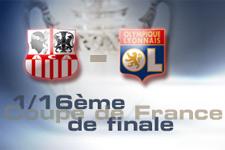 And no... the Olympians will not be playing at the Stade Gerland in the next round of the Coupe de France. They have drawn Ajaccio, away.
Once again, Les Lyonnais will be on the road in the Coupe de France (French Cup). Following Grenoble, now read : Ajaccio. Rolland Courbis’ team is struggling in the league and beat St-Lô 2-0 (Laurenti, Antonio Carlos).

In the league, Les Lyonnais count four defeats, two wins and three draws, but have not lost to Ajaccio in Corsica since the islanders returned to the top flight: two wins and a draw.
Facebook
Tweet
Forum