A sting in Lyon’s tale 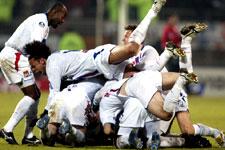 Two teams in top form for a huge clash... Set against an enticing backdrop of individual match-ups with three points for the winner… Both sides with strengths and weaknesses...
For Lyon, Réveillère and Abidal are still working their ways back from injury, Malouda is still not match fit and Diatta has flown off the take the captain’s armband of Senegal. Yet despite the absences, and with no pun intended, OL is in truly Olympic form, as is shown by its 4-0 thumpings of Strasbourg and GF38. The young ‘Gones’ were in evidence especially in the Cup win over Grenoble. Benzema? “He’s an example,” said Govou on Monday. For Marseille, the example to follow came from Lille and they made no secret of following ‘Les Dogues’ game plan.
Coach Fernandez can choose from “new faces” and “fresh blood”; Barthez’s hamstring injury has gone; Lamouchi and Déhu have been rested; Wilson Oruma has delayed his departure to the CAN by a few hours; Mickaël Pagis has signed on… Maoulida and Bonnissel have also unpacked their bags on the Cannebière to cover the departures of Beye, Niang, Méïté and Taïwo to the CAN.

Tonight, it’s Pascal Garibian thqt will join the two sides on the field with whistle and stop watch at the ready.

Juninho set about fine tuning from 35m and his free-kick flew just centimetres wide of the mark (6’). From a Berthod cross, Govou’s header met with the same fate (8’). A new free-kick, same free-kick taker... a few centimetres closer with a similar result (13’).

In the midfield, Diarra is solid, hard, perhaps a bit too solid and hard on Ribéry, at least that’s what the referee thought. Berthod was forced off after taking a knock and the Mediterranean side took advantage of his absence… and then the lead. Lamouchi played a neat one-two with Pagis and found himself alone up against Coupet to open the scoring in the 19th minute (1-0).
Monsoreau replaced Berthod and ‘Les Gones’ pressed hard against a Marseille side forced into their own camp and playing with five at the back.
Barthez was the forced to be cautioned, verbally, for time wasting (31’) and as Juninho’s free-kicks edged ever closer, Marseille was saved by the woodwork. The match really took off, Cris shot off down the wing... everything was happening so fast… Malouida and Diarra see yellow... the corners and the free-kicks multiply. The first half drew to a close with another header from “Air Govou” which failed to hit the mark.

Clerc was in the thick of the action, always available on the right, he tried his luck from the edge of the area. Barthez was there to diffuse the danger.
It’s on this same side however, that Nino and Govou win back the ball. Wiltord cuts inside and squares the ball and Carew lets it run for Tiago. The Portugal international slots home from the penqlty spot on 52 minutes (1-1). Fred replaces Carew on the hour mark. François Clerc is still full of running and his offensive forays almost paid cash but Fred was just to short (63’). From another of his centres, Govou fired ever closer to the top corner. Closer... closer... Cana goes into the book for an assault on Juninho (68’). In the mix, Fred fires a volley which seems destined for the back of the net but is somehow turned away by Barthez.

[IMG39628#R]The referee is whistled by the public for not whistling enough as Marseille waste seconds which turn into minutes. Pedretti’s entry sees Tiago take over the role of François Clerc, given an early shower after a great game in the engine room.
The fouls add up and the minutes tick away… And then Sidney Govou shoots!!!!! At the edge of the area he fired his response to all the fouls, the time-wasting, the attacks… A magnificent, powerful volley which flies into the back of the net from Déhu’s header (83’). Mr Garibian sends Lamouchi to the changing-rooms earlier than expected while Coupet takes to the skies to nullify the attacking potential of the other Olympique.

[IMG39629#L] ‘Les Lyonnais’ fought their back into this summit clash thanks to a great solidarity. One has to applaud the performance of Clerc, with his 19 balls won. The team’s work gave ultimate satisfaction to the supporters, well and truly accounted for. And what a goal from Govou, obviously he enjoys playing this team. As for Coupet-Barthez? Everything was said about this battle to take place at opposite ends of the field… the important thing was, as the players rightly pointed at the final whistle, was the three points.