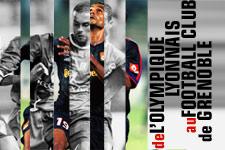 Grenoble-OL is a big match, which looms like a great celebration of football. Everywhere in the Isere region people are talking only of the last-64 of the Coupe de France. This will be the fifth time the two sides have met in the Cup competition.

History The history of football in Grenoble has been anything but smooth. In fact the highs and the lows have followed hot on each others heels ever since the round ball arrived in Isere. Grenoble were twice crowned Ligue 2 champions, in 1960 and 1962, and each was followed by a season of top-flight football which ended in relegation. After going bankrupt, Olympique Grenoble Isere joined forces with the Norcap club, in 1997, form Grenoble Foot 38. The club had to restart in CFA but quickly made it’s way back into Ligue 2. The president of the club is Kazutoshi Watanabe, a 44-year-old Japanese businessman and director of the Index company. For the last two seasons the club has been coached by Thierry Goudet, a former Le mans coach.