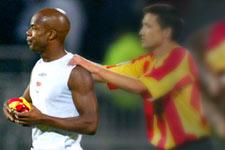 The first of January may appear for some like April 1, full of practical jokes. Rest assured you can pass you holidays in total serenity. Safe in the knowledge that you can laugh at those who profess the iminent departure of Sylvain Wiltord or Florent Malouda because they wil be there to excite you for the whole season. OL is a great reason to be happy, in love with the beautiful game.
Facebook
Tweet
Forum