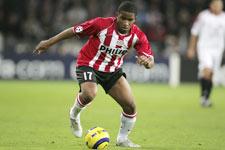 OL resumed training on Wednesday afternoon and will be back in official competition against Strasbourg on January 4. What have OL’s future Champions League opponents, PSV Eindhoven, been up to during this time?
Well, PSV Eindhoven haven’t stopped! The team coached by Guus Hiddink have already qualified for the quarter-finals of the Dutch Cup by beating FC Twente 3-0 (Farfan and Vennegoor of Hesselink, x 2). On December 26 they beat beat Nimegue 2-0, while Alkmaar lost 2-0 to Feyenoord. Which means that Cocu and co. are now solitary leaders, three points ahead of Alkmaar and Feyenoord.

On Friday, December 30, PSV play FC Twente in the first game of the second half of the season before taking a break until January 14 when they travel to Sparta Rotterdam.
Facebook
Tweet
Forum