One blemish on a beautiful October 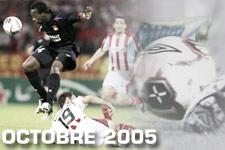 Right up until December 31, 2005, you can relive all the highlights of OL’s superb year, month by month. Today it’s October’s turn.
A frantic month started in Brittany on October 2 where the 29,000 spectators in the Stade de la Route de Lorient hoped they would witness the first defeat of the champions. For the forst 53 minutes it looked a possiblility as the Lyon boat was rocked by wave after wave of Rennes attacks. Trailing at the break Lyon turned it around with three second half goals. Juninho (53), Tiago (73) and Wiltord (89) were the scorers. The win revealed a new approach for the club: An attempt to control the game with a ruthless efficiency up front. The Olympians appear in total control thoughout.

With such a congested calendar any slip could bring the machine undone. Just four days before the crucial Champions League clash with Olympiakos, OL faced a real trap against Ajaccio (winless for nine games) at the Stade Gerland. Twice Lyon allowed the islanders to equalise before ‘Nino’ finally made the game safe in the 69th minute. OL sweep the opponents aside one after the other in clinical fashion.

No chance for the grass to grow before Europe cane knocking at Gerland in the form of Olympiakos and the round-of-16 got a little closer. Juninho led the way courtesy of his right foot and a fourth minute free-kick. Unfortunately OL is unable to kill off the match and Keffes reminded them that the Champions League is Europe’s toughest competition with a superb 30-metre lob (84). Yet just like against Ajaccio, Houllier’s players showed their ability to react to any situation: Juninho laid on the ball for Govou to volley home (89). OL got home on the line.

OL learnt it leasson: when the chance is there, you have to finish the match. Against Metz on October 22, it was 3-0 at half time, thanks to Carew (24), Juninho (36) and Wiltord (45). Five minutes after the restart and Malouda made it 4-0. Game over, and OL had 30pts from a possible 36. It seemed clear sailing as Lyon headed to Nantes for the last-32 of the Coupe de la Ligue (League Cup).

Yet this Wednesday, October 26, the Lyon players seemed to lack the cutting edge. Incapable of equalising following [IMG39582#R]Diallo’s opener (30), OL had to wait until stoppage time and Sdney Govou’s goal to take the game into extra time. After 30 minutes, the shootout demons from Endhoven came back to haunt OL. Lyon was eliminated.

After a fall you have to get straight back in the saddle. Sochaux proved the redemption. Before the match Gregory Coupet was given the UNFP, Canal + and L’Equipe Player of the Month Award for September. From the outset the Lyon side launches into wave after wave of attack: Carew, Wiltord and even Malouda are unable to break the deadlock. Yet the hosts finally registered their 11th win of the season thanks to a moment of magic from malouda in the 54th minute. Just days before the vital return match against Olympiakos, the red and blues were back on track. They finished the month with the record: five wins and a draw. While the elimination from the League Cup was a regret, the season is still long with another two Cups on offer. If anything, the Cup elimination may allow Les Gones to concentrate more fully on the Champions League.
Facebook
Tweet
Forum