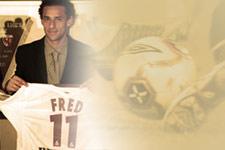 Right up until December 31, 2005, relive all the hightlights of OL’s extraordinary year, month by month. Today you can catch up with August...
What heat... summer rolls on. Just like the Essien Affair which still hasn’t been wound up! The more the days pass, the less the Ghanaian smiles and the mopre he wants to join Chelsea. One way or another, the situation needs to end. In the meantime the Lyonnais wrap up a 2-1 win against Le Mans in the first match of the season, thanks to a superb Carew header from a Reveillere cross. Cacapa’s men then scrape past Strasbourg thanks to another Carew goal, 1-0. The giant Norwegian capping off fine start to his Gerland career. Pedretti replaced Essien in a 4-4-2 formation. Juninho made his season debut in the 65th minute and as for Coupet, his brilliant save from Diane ensured all three points for the champions.

After the Alsace outfit at home, it was time for a trip to the Veldrome and a meeting with Marseille. It bagan badly with Taiwo’s free-kick deflected in off the wall after just seven minutes. Coupet then kept his side in the match before “Mister John”, set up by Govou equalised. OL should even have had a penalty, missed by Mr Duhamel.

Six days later, before the visit of Nancy, Essien finally quit Lyon for a record sum. Good luck with Chelsea! There will certainly be one or two new faces and Bernard Lacombe heads to Japan with Marcelo. Back at home, promoted Nancy caused the quadruple champions no end of trouble. Luckily, in stoppage time, a Cacapa header delivered the win.

Before the end of the transfer window, OL are once again in the news. The Portuguese midfielder Tiago joined from Chelsea. He signed a four-year deal and is charged with replacing the powerful African who went in the other direction. Nilmar returned to Brazil on loan with Corinthians, to be replaced by the rising star Fred. The Lyon squad is now complete and ready to fight on all fronts. On August 28, without the new recruits OL were quickly in control against Auxerre, thanks to a Diarra header from a Juninho free-kick on six minutes. Coupet then produces no less than three brilliant saves before Juninho launches a develish free-kick into Cool’s penalty box and directly into the net without taking a touch, for a 2-0 win.

The month of August drew to a close with 10 points from four games, the end of the trasfer market, but also with the Champions League group draw... The Galacticos of Real Madrid will open the competition at the Stade Gerland! What a reward for the club/ Olypiakos and Rosenborg completed the group.
Facebook
Tweet
Forum