A month of may full of good cheer 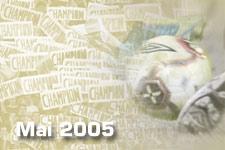 Right up until December 31, 2005, relive all the highlights of OL’s fantastic year. Today you can check out the month of May...
“You can never have too much of a bad thing” perfectly sums up Lyon’s month of May. OL began the month 11 points clear but were out of all the domestic and European cup competitions. The month, therefore, was distilled into four parts. Four very different and unforgettable parts. Four parts dealt like gifts to the Lyon public and all French football fans.

Three years. It had been three long years since Lyon had been crowned champions of France at the Stade Gerland.
But on May 8, 2005, OL was crowned French champions for 2004/05 and began a series of gala performances. More than just winning games, Juninho and co. turned on the style and the emotion...
Everyone always imagined Sidney Govou, such a hero at the Gerland, would be the star of the show. But this game was one born out of the imagination of every young footballer. It was the story of a captain, seriously injured, who fights back and scores the winning goal. The season of Claudio Cacapa is almost too good to be true!
On October 31, 2004, against Strasbourg,Cacapa was forced to leave the field after a terrible tackle from the Malien Keita. After an aborted attempt to comeback against Monaco in February 2005, it was not until April that the Brazilian reclaimed his captain’s arm-band.
On this particular May 8, with Lyon needing a win to secure their fourth consecutive crown, Claudio ran the full length of the field to score with a thumping header - his only goal of the season! ‘Juni’ would go onto finish the night with the supporters in just his back underpants while Cris seemed to celebrate his first title with Lyon for ever and ever.... Brazilian flags flew high in the Lyon sky.
By winning a fourth consecutive title, OL went into the French football records, joining Saint-Etienne and Marseille, for so long the benchmarks of the French game...


Fast-forward to May 15. Against a Bordeaux side fighting for its survival, Lyon would not take their foot off the accelerator. “Professionalism goes all the way to the end of the season,” said president Jean-Michel Aulas. During an evening dedicated to the Doctor Clown Association which aids sick children, the Lyon players donated all their earnings from a match of the highest order. Rool saw yellow then red. The Olympians with their heads painted red and blue pulled out all the stops. 5-1 and a footballing lesson was the result. Cris broke with tradition and scored (twice - 33, 46) well supported by Malouda (24) and Govou (67, 83). Clearly OL 2004/2005 was a great vintage!

[IMG39572#R]After the face painting against Bordeaux it was the turn of the Brazilian colours to fly high around the Stade Velodrome. Juninho, who seems to have hands instead of feet lit up the match with a moment of magic (55). Jinking this way and that, dummying one after another the Brazilian waltzed through the entire Marseille defence and side-footed the ball past Barthez. A goal of pure Juninho class and later to be named Goal of the Year by OL fans.

May 28. While most eyes were fixed on the uncertain future of Nantes on the final day of the season Lyon settled for a scoreless draw at Nice to close out the remarkeable campaign. While the fireworks erupted and the emotion reached fever pitch, the curtain came down on “Le Guen’s three years”. Three years in which the Breton stamped himself on the history of the club. Three years and three times French champion.
[IMG39573#L]Cacapa’s men deserved it: the best attack, the best defence, the Fair-Play award and a fourth consecutive crown.
What will be remembered from this seasons 53 matches? The rise and rise of Gregory Coupet to the teams most used player? The two-legged tie against Werder Bremen? Juninho’s free-kicks? The beautiful hommage of the Nantes crowd to the two Lyon fans killed in a car accident? Or the disappointment of seeing Paul Le Guen quit the club? Thanks for the three titles. Thanks for your kindness, your honesty, your humility, your values...
But how will the club ever overcome the disappointment of losing to PSV Eindhoven in the quarter-finals of the Champions League? The loss is an immovable mark on an ptherwise impeccable footballing record.
Rendez-vous in 12 months time. May the month of May be forever unforgettable!
Facebook
Tweet
Forum