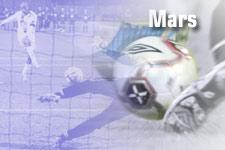 Right up until December 31, 2005, relive all the highlights of OL’s year, month by month. Today, we take a look at March...
The Coupe de France (the French Cup) has eluded OL for decades. In being drawn away to Clermont in the round-of-16, Lyon probably thought there were tougher ways of getting into the quarter-finals. Yet in freezing conditions in Auvergne, Coupet and co. took more than than dealt. Rodriguez opened the scoring with a free-kick at the start of the second half... Mr Colombo blew for full-time moments after Wiltord got on the end of Frau’s cross, as the man in black’s watch registered 94 minutes. Goalless extra time led to penalties which the home side won. The elimination was a huge disappointment.

Forgetting the Cup, Lyon headed north for a change of scene. On March 4 at the Stade d’Ornano of Caen, the pitch was in a terrible state. Unplayable according to most observers - a point which Lyon’s club officials stated officially before kick-off. On a paddack of a playing surface the Olympians seemed unable to put a foot one front of the other and Caen improvised to the elements and Mazure scored the only goal after a poor clearance. It’s not worth reminding you of all that was said and written in the wake of this match!

Four days later Werder Bremen headed to Lyon looking to over turn their humbling in the first leg and secure an unlikely qualification for the next round of the Champions League. In the opening 30 minutes, Lyon had already scored the same number of goals as in the tie’s opening match. The two-legged tie became a walk in the park. Even if Micoud did get one back for the visitors just before the break. What could possibly happen in the second half? Wiltord scored, before Ismael converted from the spot for Werder. Then three more Lyon goals pummelled the German side into submission 7-2 - including a first professional goal for Jeremy Berthod... an unforgettable party.

[IMG39563#R]Return to domestic competition at the Stade Gerland with the visit of bottom club Istres. The match was dull, yet saved by two masterpieces: the free-kick from Juninho and the cannonball from Govou which won back the lead after Gravelaine’s men had equalised.

Lyon stayed on top of the league, eight points ahead of Lille and 11 ahead of Monaco. On March 19 the team headed for Strasbourg with this comfortable cushion. The Alsace club had strung together some good results which had all-but secured their top-flight future, but the effort had taken its toll and they proved no match for the force of Paul Le Guen’s side. Wiltord was set free by Diarra and he beat Cassard for the only goal of the game, 30 minutes from time. Once again, OL had demonstrated their formidable superiority.

[IMG39562#L]There were 12 days without a club match to see out March... what do you do? Well, that depends on whether you are an international or not. In Lyon international had two World Cup qualifiers to play while a non-international had to prepare for April. PSV Eindhoven was waiting for the team in the quarter-finals of the Champions League and why not AC Milan in the semis? There was also league games against PSG, Auxerre, Nantes and Lens…
Facebook
Tweet
Forum