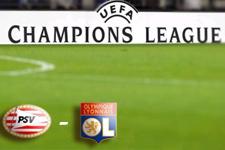 In Nyon, the draw decided to pit Lyon, once again, against the Dutch of PSV Eindhoven. This time OL will host the return leg in the last 16 of the Champions League. The two teams met most recently in the Peace Cup over the summer.
Obviously PSV and OL just can't be separated. In less than 12 months, they will clash no less than five times. At the moment the record stands at three 1-1 draws. Who could forget the Batavians seeing off OL in last year's CL quarter-finals on penalties. "We never know if it's a good draw when the ball drop out. The club is desperate to prove something to PSV. Something to prove after that sense of injustice last season... that can all be extra motivation. OL is better this season and the players want to show it in Europe. I wanted to avoid Chelsea and Bayern. I agree with Juninho in saying that it would'y have been good to get Werder Bremen; the Germans would have been super-motivated after the two games last season, even if I think PSV is potentially the toughest opponent we could have drawn after Bayern and Chelsea. But in the end, OL is an opponent as feared as Chelsea. PSV? They're still a very good team, despite the departures. The game in Korea is not worth mush really, it was just a warm-up match. It's an exciting draw, and gives us the chance to get over last season." Gérard Houllier a livré son sentiment immédiatement après le tirage au sort qu'il a suivi seul lors de la mise au vert de son équipe avant de jouer ce soir contre Lille.