Everything you need to know about Lille 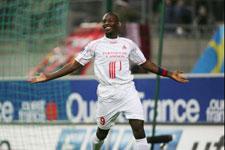 It's the 32nd league meeting between Lyon and Lille this Friday at the Stade Gerland. Les Dogues are one of the teams the Olympians like to host having won 21 trimes with six draws and just four defeats.
The last loss dates back to the 2000-01 season, 0-1, goal to Landrin. From the current OL squad, Coupet and Govou both played that day. Last season Frau scored the only goal of the game in the eighth minute after being set up by Govou from Abidal's cross. It was PAF's first goal for his new club. Lille are currently eighth in the standings with 27 points (seven wins, six draws and five losses; 23 goals scored and 14 conceded.

41 Yellow Cards: Tafforeau and Tavlaridis, 4 each

The referee for the match will be Mr Laurent Duhamel, from Normandy, who hasn't refereed Lille this season but was in charge of OM 1-1 OL.
Facebook
Tweet
Forum