Football in Lyon before OL 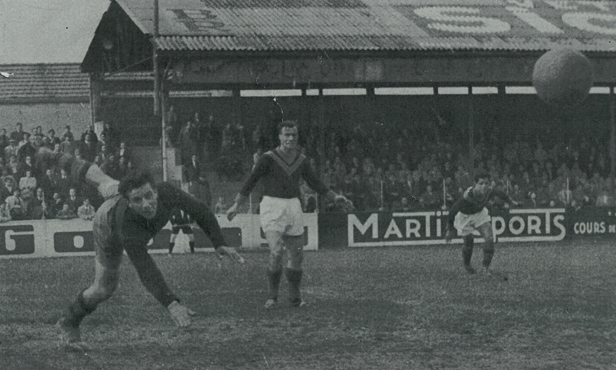 In the autumn of 1917 the 100 or so initiated ones from the city were divided between four clubs: the L.O.U., the C.S. Terreaux, the A.S. Lyonnaise and the F.C.Lyon.
The first round of the Coupe de France (the French Cup) threw up a derby match of the latter two.

Football in Lyon before OL

The first round of the Coupe de France (the French Cup) threw up a derby match of the latter two. The league was a regional affair and the cup was only for those in the know with 48 teams taking part.

This was the start of a privileged relationship between Lyon and the Coupe de France which would last for years and years.

The FCL qualified for the semi-finals and hosted the formidable Parisian outfit A.S.F.

For the occasion, more than 2,000 spectators surrounded the special pitch arranged in the Parc de la Tête d’Or. Edouard Herriot decided to integrate the match in the annual Lyon Fair.

The players of FC Lyon won and qualified for the final in Paris, at the Stade Olivier-de-Serres on May 5, 1918. In front of a few hundred spectators, Olmypique de Pantin proved too strong for the FCL and the capital club saw their name engraved on the Charles-Simon Cup.

[IMG29979#R]In 1933, Jean Mazier, founding president of the famous club with the red and white checkers, threw himself into the new world of football professionalism. His proposal is met with various degrees of enthusiasm by the local clubs and the municipal offices.

Unfortunately, the season was a sporting disappointment. And Jean Mazier decided to start over with another club, the A.S. Villeurbanne.

Second-last in the second division the A.S.V. lost its credit. But Jean Mazier didn’t give up easily and he re-entered the team for the 1935-36 season under a new name: Lyon Olympique de Villeurbanne. It was to prove a new and final failing. Jean Mazier, physically and morally spent, abandons his crazy dream of a professional football club for Lyon. No money, no facilities and World War II... Lyon football was in hibernation.

The arrival of Félix Louot changed matters. His L.O.U. would revive the same principles, the same determination and the same faith as Jean Mazier to lay the solid foundations of professional football in Lyon. Southern zone French champions in 1945 and quarter-finalists in the cup that same year, L.O.U carved out, little by little their reputation in the French football scene. However, problems emerged due the cohabitation of amateurs and professionals within the same omnisports club and Félix Louot and his entourage began thinking of a new club structure.

O.L. is on the verge of foundation. The name, Olympique Lyonnais was thought up and put forward by Doctor Albert Trillat, the renowned surgeon. The very same man also proposed the new club adopt the colours of the city of Lyon: red and blue.