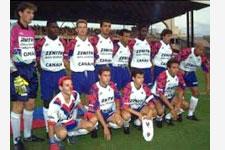 As Jean-Michel Aulas promised, OL would qualify for Europe within four years of his taking command. In just their second season back in the top flight Lyon qualified thanks to their fifth-placed finish after a final day victory over Bordeaux...

As Jean-Michel Aulas promised, OL would qualify for Europe within four years of his taking command. In just their second season back in the top flight Lyon qualified thanks to their fifth-placed finish after a final day victory over Bordeaux, when Bouderbala thrilled a capacity-packed Stade Gerland.

OL would only learn of their qualification to the UEFA Cup a few days later when Monaco’s Coupe de France victory liberated one place in Europe.

The Coupe de France (French Cup) would again prove disappointing with a round-of-64 elimination at the hands of Angers.

[IMG29994#R]OL saved their first division status by two little points, finishing a lowly 16th. In the Coupe de France, the club was ousted at the first hurdle by second division Istres. Finally OL re-acquainted themselves with European competition, but not in the manner they would have liked.

In fact the team would lose both games against Turkish outfit Trabzonspor, conceding eight goals, including four at the Stade Gerland – transformed into a suburb of Istanbul, such was the support for the visitors.

Despite an overall improved performance in the league, Lyon was above all, inconsistent. If the first half of the season had been full of promise (14 games undefeated), the second half was a disappointment and OL barely survived, finishing 14th.

In the Coupe de France, elimination in the first round against third division Pont Saint Esprit, provided fresh disappointment.

[IMG29995#L]This season President Aulas provided one of club’s biggest recruiting coups in the club’s history. With the arrival of Jean Tigana as coach, three of Marseille’s stars decamped to the banks of the Rhône: Abedi Pelé, who would ultimately fail to live up to expectations and leave after just one year, Pascal Olmeta and Manuel Amoros.

OL improved year after year. After an average season, Lyon climbed back to eighth place this season and the top half of the table. However, the much-coveted European qualification narrowly escaped the club. Despite an improved performance in the Coupe de France, the club would still bow out to, what was on paper, an inferior side in Laval (D2).

This season would also see a 20-year-old finish as the side’s top scorer. Florian Maurice, a relative unknown who scored seven goals and would play a major role in the club’s impressive season to follow.

This season coincided with the glory days of several players within the Lyon squad. Of those that came through the club’s youth system N’Gotty and Maurice came of age, just like Deplace and Laville who enjoyed one of their best seasons. Finally, with Roy, Amoros and Gava, OL could rely on several talented players who would show the spirit and desire to win that started at the back of one of Olympique Lyonnais’ best ever sides with goalkeeper Pascal Olmeta.

Only Angers would beat OL at the Stade Gerland (3-1 in the Coupe de France round-of-32). OL achieved the best league performance in its history, finishing second after pushing FC Nantes all the way down to the wire.

Several years after making an impact as a player, it was as coach that Tigana left another indelible mark on the supporters of OL. Unfortunately he would leave for Monaco, and with him N’Gotty would pack his bags for Paris while Amoros returned to Marseille in the second division. OL did however, keep hold their rising star Florian Maurice, who scored 15 goals and finished third top scorer in the league. In the inaugural edition of the Coupe de la Ligue (League Cup) OL would go down to a dignified defeat at the Parc des Princes to PSG, who would go on to lift the trophy against Bastia.

[IMG29996#R]He would score 18 goals this season and go some way to redeeming an average season. Certainly N’Gotty had gone, but the backbone of the team remained intact with the attacking duo of Maurice and Gava. Unfortunately Gava would miss almost the entire season with injury. His absence would weigh heavily on the team who would finish 11th in the league. The team began to count on the players that had won the 1994 Gambardella Cup (Giuly, Bardon, Devaux) and became, it’s fair to say, a real cup team. But the side would eventually bow out of the Coupe de France to eventual winners (and league champions) Auxerre, despite hitting the bar three times in 17 seconds, ten minutes from full-time.

OL would however, shine on two fronts this season:

The first, and certainly most prestigious would be the UEFA Cup. After eliminating Portuguese club Farense , OL met Italian side Lazio. They would register a famous 2-1 at the Stade Gerland thanks to goals from Maurice and Assadourian and a superb Ludovic Giuly. Lyon progressed to the round-of-16 where they would meet the bogey team of French football, Nottingham Forrest and they lost the first leg 1-0 in England, thanks to a penalty.
Despite a relatively promising result from the first game, Lyon bowed out of the UEFA Cup after proving incapable of breaking down the English defence in a game that finished 0-0.

There remained the Coupe de la Ligue, the quickest route to European qualification and the club had made it a priority from day one.

In the semi-final, OL hosted AS Cannes to the Stade Gerland and won 1-0, thereby making the final and the chance to qualify directly for the UEFA Cup.

But the opponent proved too tough and FC Metz won the Cup on penalties, after an Eric Roy goal was inexplicably ruled out by Mr Batta in the dying stages. The Coupe de Ligue and qualification for the UEFA Cup had slipped away.

[IMG29997#L]In the transfer market OL conservedvits crowd favourite, the striker Florian Maurice and welcomed Alain Caveglia, one of the top scorers from the preceeding campaign, as well as Christophe Cocard, recent champion of France with Auxerre. Lyon’s attack looked attractive on paper. Unfortunately, from the very first games of the season there was a question mark hanging over the defensive solidity of the team.

Certainly OL scored goals and remained more than competitive on home soil, but they also conceded their fair share. After a bright start the club faded to the relative anonymity of the mid-table. Injured, OL would also lose their star striker Florian Maurice for exactly six months. Tired by his involvement in the Olympic Games, Maurice ruptured his Achilles’ tendon.

His absence further weakened the team and they conceded seven goals in a single match away to Auxerre. That was far too many for Guy Stéphan, already under pressure, and he was replaced by one of the club hierarchy, Bernard Lacombe, technical director since the arrival of J-M Aulas. He would be assisted by José Broissart, director of the Centre de Formation (Youth Development Centre) for the last 20 years.

The second half of the season began, and immediately, the psychological effect of the change in staff worked in the club’s favour. The club was quickly eliminated from both Cups (by Rennes in the Coupe de la Ligue after knocking out PSG and by Lille in the Coupe de France), but in the league they overcame their poor start and finished in the top half of the table.

Despite the "Olmeta-Sassus" affair which would see both players suspended for fighting, OL’s fantastic finish to the season (taking a D1-best 23 points from their final 10 games, including an 8-0 shellacking of Marseille on the final day) saw the club qualify for the Intertoto Cup.

[IMG29998#R]In terms of the league, this season was one of unending surprises. Six defeats at home and eight wins on the road (Le Havre, Rennes, Auxerre, Guingamp, Bastia, Strasbourg, Toulouse and Châteauroux). At the end of the year the club would qualify for UEFA Cup for the second consecutive season after a crazy final day which saw Lens crowned champions and Lyon overhaul Auxerre for sixth place and the final European qualifying spot.

In the domestic cups the record was also more or less positive. Despite elimination against future winners Paris Saint-Germain in the Coupe de la Ligue, Lyon had its best year in the Coupe de France since 1976. They would make it all the way to the semis after knocking out Saint-Denis Saint-Leu, Angoulème, Istres and Bourg-Peronnas before losing to the future league winners Lens at the Stade Félix-Bollaert, 2-0.

Lyon’s European season would be an epic. They would win the Intertoto Cup against Montpellier and go as far as beating Djorkaeff and Ronaldo’s Inter Milan at the San Siro.

The squad, stronger for their European exploits, was further bolstered by the arrivals of Dhorasoo and Grassi. The Lyon players, led by captain Alain Caveglia, made a great start to the league season, thrashing Toulouse 6-1 after an opening draw against Strasbourg. The first defeat didn’t come until Week 8, against Nantes, but the side would later inflict defeats on two leaders, Marseille and Bordeaux, both 2-1 at the Stade Gerland.

During the second half of the season drama would hit the Lyon squad. Luc Borelli, one of the team’s goalkeepers was tragically killed in a car accident. The players were hit hard by the loss of such a popular figure at the club. But the team stuck together and came through this difficult time even stronger, and eventually challenge Marseille and Bordeaux for the title, finishing third after a home defeat to Rennes and qualifying for the preliminary round of the Champions League.

In the UEFA Cup the club would again record some impressive wins. They would qualify for the quarter-finals for the first time. In the first three rounds the team would meet Blackburn Rovers, Red Star Belgrade and FC Bruges and record three away wins, and two home wins and a home draw, against Blackburn. Then came the match against Italian side Bologna who would take an almost unassailable lead in the first leg, 3-0, in what would be undoubtedly one of Lyon’s worst games of the season. In the return match in front of a capacity home crowd, Lyon almost pulled off the unimaginable leading 2-0 at the break (Caveglia and Job) the team hit the post in the second half. Despite the defeat the match will remain a memorable moment for the club that witnessed an intensity rarely scene on the terraces of the Stade Gerland.