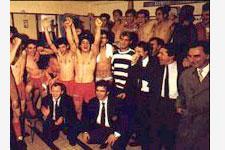 Thanks to the help of the Lyon Mayor’s Office, OL was able to construct a squad worthy of its name. Destrumelle, assisted by Di Nallo, bought Furlan, Alain Moizan, André Ferri and above all, Nikolic, an unknown Yugoslav who was to become a hit at the Stade Gerland...

[IMG29989#L]Thanks to the help of the Lyon Mayor’s Office, OL was able to construct a squad worthy of its name. Destrumelle, assisted by Di Nallo, bought Furlan, Alain Moizan, André Ferri and above all, Nikolic, an unknown Yugoslav who was to become a hit at the Stade Gerland. Armed with this new side, featuring a brilliant midfield of Moizan - Chiesa - Tigana (who had just broken into the France set-up), Lyon quickly became the surprise of the season, finishing with the second best attack.

The season also saw the record attendance set for the Stade Gerland with 48,852 spectators on hand for the visit of Saint-Etienne. A figure that would remain a French record for ten years.

In the Coupe de France (French Cup), the run was, once again, far from brilliant with elimination in the round-of-64.

In the league, OL would be leading after three matches, and sitting fourth at the winter break. All the same, the club would miss out on qualifying for Europe. While in mid-season, President Michaux was forced to cede his place to Jean Perrot.

On January 9, 1981, Jean Perrot succeeded Rocher Michaux. However, due to obviously strained relations, several players, including Tigana were shown the door.

The arrival of Kovacevic, who replaced Destrumelle, added to the musical chairs of presidents and coaches. OL was in bad shape and its image and reputation were tarnished. Hope did, however, come in the form of a great start to the season (four wins from the opening four games). The rhythm proved to hot for OL to maintain and they again avoided relegation thanks to little less than a miracle.

The coach changed again in mid-season, and after a brief reign it was the turn of President Perrot to quit the club after OL passed just two rounds of the Coupe de France. The atmosphere within the club was strained.

[IMG29990#R]Author of a great start to the season, including a first derby win in four years, OL had six points from the opening five games. But Lyon would only register another 22pts from their next 33 games. The habit of losing became ingrained and the end of the season brought with it a return to hell: Division Two.

During that time, there was another change of president, the third in three years. President Ravet made way for President Mighirian (17/01-83), who would in turn replace Kovarevic with Robert Herbin, due to the club’s poor results. But there was nothing Herbin could do to prevent relegation - the situation was already beyond salvation when he arrived at Lyon.

OL’s coffers were bare and alleviating the club’s wage bill became the recurrent theme. Emon and Domergue, the club’s two top scorers were let go and the same went for Chiesa, after 14 seasons of loyal service.

OL was forced to rely on its young players, Fournier and Fréchet leading the way, surrounded by some older heads such as Ferri, Topalovic and Nikolic. This first season back in D2 went well and OL found itself neck and neck with Marseille to earn promotion. Unfortunately, despite a one point advantage, OL would lose 1-0 to OM and never recover, finishing third.

In the Coupe de France the run was more than honourable. Lyon qualified for the third successive time for the round-of-16 but once again the adventure would end there. OL met Nantes, the reigning French champions and would bow out after a courageous 0-0 draw at the Stade Marcel Saupin and a spectacular 4-4 draw in the return leg.

[IMG29991#L]Charles Mighirian decided, under advice from Robert Herbin, to bring in some experienced players: Larios, Lacuesta and Olivier Rouyer, from Strasbourg. Despite a strong recruitment it was to be a whole different story on the field. The team was at best average, and after a defeat which left the club just two points above the relegation zone, Lacuesta was fired.

André Ferri was named assistant coach to Robert Herbin, with the aim of lifting team morale. The results followed and OL went unbeaten for the final seven games of the season and finished in mid-table after avoiding a far nastier fate.

After some major moves behind the scenes and in the board, Larios and Herbin followed Lacuesta out the door and Charles Mighirian named Robert Nouzaret – 1967 Coupe de France winner with OL – to the position of coach. In his first season in charge Nouzaret had to make do with the players promoted from the youth team and managed to finish third, behind Saint-Etienne and Alès. OL missed out on promotion to the first division in the play-offs against Mulhouse. Mighirian maintained his faith in Nouzaret.

It was Nouzaret’s second season and Mighirian’s fourth. It would also be his last at the head of OL. This season Mighirian gave Nouzaret the means to bring in a few well-known names, however, problems quickly arose between the coach and senior players, such as Ferri and Topalovic. OL finished second in their group having missed out on direct promotion after a final day defeat to Montpellier. The club headed to the play-offs and after losing to Mulhouse two years ago, would this time fail against Cannes despite an honourable 0-1 defeat at La Bocca.

OL did not, however, give up the fight and the arrival of a young Lyon industrialist to the board and then the presidency, would re-launch the club on the road to glory. In 1987 Jean-Michel Aulas unveiled an ambitious plan: “OL – Europe”, designed to have OL back in the first division and qualified for Europe within four years.

The last President before the Aulas era, would therefore end where he started: in the second division. However it wasn’t all plain sailing as Jean-Michel Aulas took over the reins of OL in June 1987, a post he still holds today.

Coach: Robert Nouzaret, then Denis Papas, then Marcel Le Borgne, all for the season 87-88

[IMG29992#R]This season proved to be far from a constructive working environment for OL who would work through three different coaches over the course of the one campaign. Despite all this, Jean-Michel Aulas’ first year in charge was a positive one and the club finished second in its group only to stumble 2-0 in Normandy in the promotion play-offs.

[IMG29993#L]In just his second season at the club J-M Aulas gives Bernard Lacombe (sporting director) and Raymond Domenech (new coach) carte blanche to recruit whoever they saw fit, freeing considerable financial means for the purpose. The tacticians brought in several experienced players as well as youngsters from the youth team.

The results were immediate. OL quickly hit the lead in their group and would never let it go. The team, playing attacking football, flattened everything in their path thanks largely to the exploits of their goalscorer, Kabongo.

Promotion was secured in the match against Alès. OL, thanks to the 0-0 draw, put an end to six seasons in D2 amidst surreal scenes in the Stade Gerland. Young player Remi Garde admitted after the match: “Occasionally I just stopped playing to look at stands going wild.”

The second goal, ‘OL – Europe’ was more ambitious still... Could it be achieved within the timeframe?

Lyon fought back from a difficult start and in the end deserved their eighth-placed finish at the end of the season.

In the Coupe de France, OL was unceremoniously dumped out in the round-of-64 by second division outfit Nîmes.